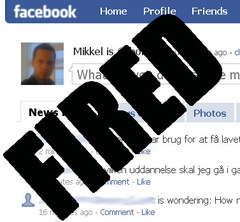 In a harsh move by Volvo, the car company fired three workers from their factory in Sweden because one of them compared his workplace to a “madhouse” in his Facebook status.

The other two were fired for commenting on it.

The man wrote the offending status during a break at work just before the weekend break – he said “One work day of the week to go in this madhouse” according to the local Skaraborgs Allehanda newspaper.

Volvo deemed that to be “disloyal”. They refused to accept the man’s claim that he had also posted positive things about Volvo on Facebook and that at the time of writing the status he was upset because his mother was seriously ill (she died two days later).

The other two men posted comments agreeing with his status and got the axe too.

Just me or is that ridiculously harsh? I mean it’s one thing if he was a chief PR for Volvo and he was Facebook friends with clients or had a public profile, but this is just a guy moaning about work. That’s NORMAL. And he should be allowed to do it on Facebook.

His Swedish trade union are looking into the case, which sounds which sounds like ripe old case of unfair dismissal to me. Surely free speech comes into this too…?

In the meantime, don’t be friends with your boss on Facebook.

Related: The Twitter Joke Trial: What Does It Mean For Freedom Of Speech
Yes people put drunk pictures on Facebook & what of it? Why the media needs to grow up..