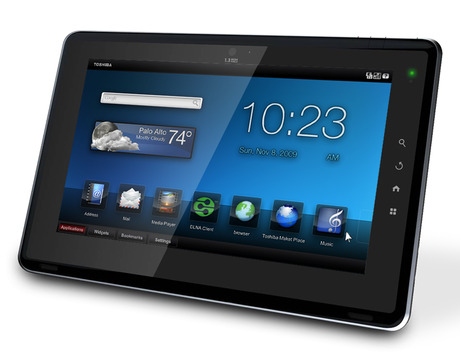 Fans of the tablet computer have a lot to enjoy in this year’s IFA offerings. The strongest contender in the field is the Samsung Galaxy Tab, but Toshiba’s Folio 100 mobile device is pretty interesting too.

Folio’s trump card here is the Android OS – Android 2.2 aka Freyo. That means a lot of apps and features and speedy operation. Flash, multitasking and a full suite of

With a 10.1 inch screen it’s just a shade bigger than the iPad’s 9.7 inch one though the battery life (7hrs) is shorter than that of Apple’s Fondle Slab (10hrs).

Where the Samsung Galaxy Tab is almost more personal organiser, the Folio is plonk in the middle of Apple’s territory – marketed as a multimedia device. And it has a lot of the hardware that Apple didn’t put in iPad: an SD card slot, HDMI connector and a USB 2.0 slot, and an integrated 1.3MP front-facing webcam making video-chat simple.

A Mobile Broadband model with 3G support will also be launched later in the year. It comes with 16gb of storage but that’s expandable up to 32gb with the SD card. Video calls (over wifi or 3G) will be provided by Skype rival Fring).