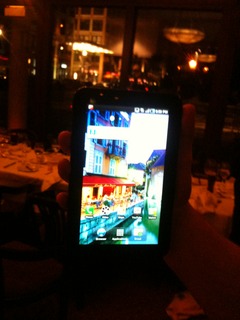 So how do you take on Apple in the tablet PC market? Well I guess you do things a bit differently and add functionality that Apple users can only dream about. And that’s exactly what Samsung has done with its Galaxy Tab which was announced at IFA in Berlin today.

I managed to get a bit of a sneak preview and was very impressed with what I saw. Here’s a roll through the key features.

1 It has a 7inch screen – For me 5inch screens are too small, while the iPad and its 10inch screen (and the weight it adds) doesn’t really feel like a portable device. I really like the 7 inch format. It does feel small enough for you to carry round with you everywhere but large enough to display the web in a bold and very readable way. It is much lighter than the iPad too and you can hold it in one hand. Samsung has said that 5inch and 10inch versions of the tablet PCs are in the offing but for now this will do nicely.

2 It has on board camera – Unlike the iPad there’s a 3.2 mega pixel camera for snapping plus a video camera for creating content and video calling. I am not entirely sure how often you would use the device to take pictures as it is too big to hold steady like a camera, but the video messaging facility is a very nice touch.

3 You can make voice calls – In true Dom Jolly style you can use the Galaxy Tab to make and receive calls. You either hold the device to your ear, which does make you look very strange, or use a Bluetooth headset.

4 It runs Google Android, but also has few Samsung apps – The Samsung ones are what you’d expect; email, web browsing, music. There’s also a neat feature called Reader Hub where you can access a range of magazines, newspapers and books. Samsung has done deals with Kobo (for books), Zinio (magazines) and a company that takes newspapers and turns them into PDF style documents. It is nice to have access to all that content in one place.

5 It has upgradeable storage – You can opt for 16 or 32 Gigabytes of storage and upgrade that via a Micro SD card if you want more.

6 It can run using HSDPA – Which as you all know is a faster version of 3G so in theory it can be much quicker to download data on the move than the iPad.

7 It will be mainly sold via phone networks – Samsung hasn’t announced its network partners yet, but the hot money is on Orange. It will be available across the globe later in the month and will reach the UK in October. No news on price.

Overall I was pretty impressed. This clearly scores over the iPad in several key areas (camera, phone, storage, mobile connectivity). I also like the more portable size and the way you can hold it one handed. I’d have liked to have seen a USB socket on there though. If Samsung can deliver some attractive deals with networks it really will have a winner on its hands. I think the next gen iPad will look a lot like this too.

One thought on “IFA 2010: Hands on with the Samsung Galaxy Tab tablet PC”