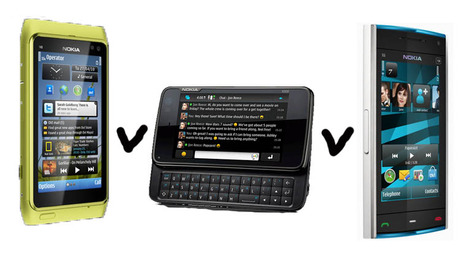 Nokia busted out the specs of a new phone this week, by releasing details of the N8 a big Amoled touch screen with a massive 12 megapixel camera. Last week we stacked up the iPhone 3G, the Android powerhouse the Nexus One and the Nokia N900.

This time we decided to measure up the three top smartphones in Nokia’s roster. The N8, the N900 and the X6 go head-to-head here and sparks fly. Well specs fly. But which phone wins?

HARDWARE:
The N900 is a touchscreen slider, the others are all both touchscreen – the X6 and N8 use capacitive technology to register touch making them tap rather than click-the-button-behind-the-screen experiences. The N900 uses a slower resistive technology for the screen.

The screen on the N900 and the N8 is 3.5 inches across with the new N8 boasting an Amoled screen, known for brighter and clearer display and gem-like colours. The X6 is a more compact 3.2″.

As for chips and processors: it’s a little complex. The N900 boasts 3 chips working three different fuctions which allows for power when you need it but doesn’t run down the battery when you don’t. As an efficient work phone, it’s the most powerful of the three.

Cameras are decent on all three phones, but the N8’s is a stand-out with 12 megapixels, a high-quality flash and the abillity to shoot High Definition videos. All have standard 3.5mm headphone jacks.

I’ll give a shout-out to the hardcore N900 fanboys who commented on my earlier article comparing the N900 to the iPhone and the Nexus and let Serhiy say what he thinks wins out about the hardware on the N900:

“Things like N900’s 2 CPU architecture, power for when you need it, battery savings for when you don’t… a keyboard, A/V out, 30 gigs of space, FM transmitter, FM radio, and a pair of good ear buds”. 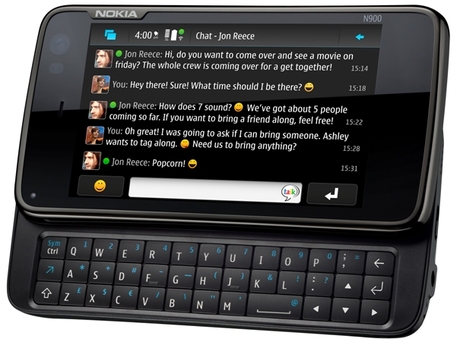 SOFTWARE:
These phones all run Nokia proprietary operating systems: the Maemo for the N900, older Symbian for the X6 and the new Symbian ^3 for the N8 (the first device to use the system). Jury is still out on the new ^3 system, but it promises

As for apps: all have Nokia’s Ovi store – not something that we get super excited by, though good user interfaces add useful functionality with native software.

The Nokia X6 comes with music. The phone title is actually “Nokia X6 Comes With Music” and this is a massive feature on the phone. It’s not some ingenious technologial advance by Nokia but it is smart work in securing the licenses and contract that let them do this. It shows tech companies thinking outside the hard specs and into the user experience, and this will be a deal-maker for a lot of people. Though note that the tracks are chained down to this device with Digital Rights Management (DRM) tracking.

GOOD FOR:
The Nokia N8 –
A great phone for picture-takers, the N8 is a beautiful Amoled screen capable of showing TV very crisply and a high power camera with some great video-editing software onboard.

The Nokia N900 –
You’re not concerned about gimmicks and you’ve got some work to do. You want a powerful phone with user-friendly features like FM radio and a lot of useful native tools for work.

The Nokia X6 –
You like music. Hell, you love music and you make use of the free download facility to the maximum. Otherwise you want a decent usable touchscreen smartphone.

CONCLUSION:
Nokia lacks the eye-catching media-baiting features that say iPhone has in their app stores, but it does seem to be thinking laterally about what consumers want and providing phones some great hardware – big storage capacities and great cameras. Maybe just maybe we don’t all want hundreds of thousands of apps, even if they project sonnets onto buildings and show us where the nearest manga shops are. In the words of N900’s greatest fan, Serhiy:

“if you’re looking for a flashy toy to drain your money through apps and minutes, yes iPhone and Android are the way to go. However if you want to get shit done, save some money, or just get your feet wet in some real Linux I highly advise the N900.”

While they may have lost space at the top of the market, Nokia are still the biggest phone manufacturers and know a lot about what people want in a handset.