If you’ve heard of a little something called the iPad, then you’ll probably know it’s not available in the UK yet. But if you’re into the whole browsing the internet on a touchscreen computer idea – you may be interested in the JooJoo.

Made by Fusion Garage, the JooJoo is comparable in price to the iPad, coming in just under £400, and is billed as the world’s largest capacitive touch screen device. Unveiled in December 09 in the US, JooJoo is available for order and delivery from now in the UK.

Attractive features of the JooJoo include: speedy start-up – a nine-second boot up time; easy-to-use user interface, an innovative browser-based operating system, 12.1-inch screen, Flash support and USB connections. You may note that the iPad doesn’t feature either Flash support or USB connections.

As for the browser-based operating system, the Fusion Garage CEO claims that’s one of the big strengths:
“The Internet is consumed via many devices–none of which are specifically designed for the experience,” said the CEO, Chandra Rathakrishnan. “joojoo is the first device completely dedicated to the Internet. joojoo was built from the ground up with the aim of providing the ultimate browsing experience.”

It has also got an app store, plays high definition video, runs off a 1.6GHz Atom processor and does do multitasking. The battery ain’t up to iPad levels though – lasting only 5 hours of web-browsing, and we doubt that app store is as well stocked as Apple’s. If it were half the price, this would be less of an issue… 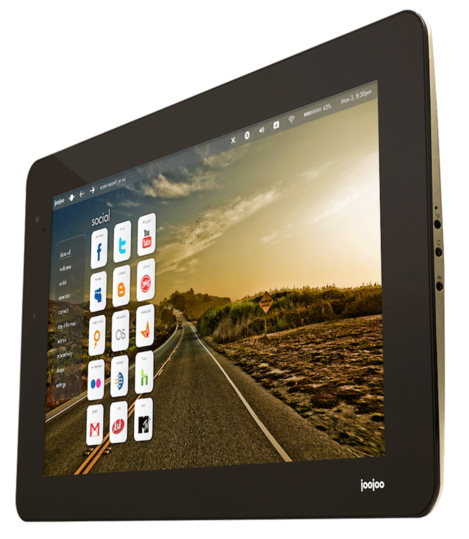 joojoo can now be ordered for delivery to the UK through the Fusion Garage online store: for £319 plus tax and shipping