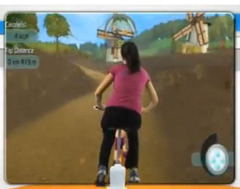 Wii accessories are getting bigger. That simple tilt sensitive controller will shortly be joined by a full-blown wii-connected exercise bike.

Made by Big Ben Interactive the Cyberbike is an exercise bike – but an exercise bike made interesting by its connection to one of the decade’s biggest games consoles. No longer do you just have to stare at the undulating bottom of the person in front of you at the gym, you can wander off in Wii World.

You don’t have to ride a bike onscreen either – hell no – use the Cyberbike’s controls to pilot submarines, helicopters and mine carts around the game world.

Of course like a normal exercise bike you can set the difficulty level and like any Wii product you can measure the exertion you put in. The same company are also releasing two 500g dumbbell peripherals which each house a Wiimote and include a variety of programmable exercise routines.

These sounds like products that could change the nation’s sitting rooms. Video demonstration of the cyberbike below:

Not available yet, try the BigBen Interactive Wii Accessory site for more information.. we’ll post up when these hit the market..

Related: The black Wii and Why Wii is a girl’s best friend