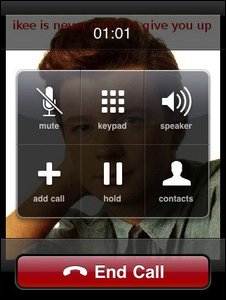 Can this poor man ever escape? All he wanted to do was make commercially successful music in the late 80s and early 90s.

Other retired rock and roll stars get an easy ride, some royalties money, a holiday home and a few tours. But for Rick Astley, British singer who had a hit in 1987 with Never Gonna Give You Up, the story is so different.

There he was… just keeping his head down and avoiding social media when a torrent of RickRoll memes pushed him to the forefront of the memeverse.

And not only is he the subject of one of the most viral memes ever in the world, he’s now popping up on iPhone screens all over Australia. Rick Astley is the face of the only known worm on the iPhone, a little bug that has just infected jail-broken Australian iPhones and – yes… changes the victim’s background image to a picture of Rick Astley.

The picture of Rick Astely above in fact. It’s not currently dangerous, though does highlight flaws in the security of jail-broken devices.

Related: Meme of the Day: mashing up social networks and Rick Astley scoops Best Act Ever at MTV Music Awards