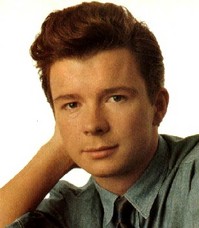 Such is the Power of the Internet – Rick Astley, who had medium-sized success with one song in 1988, has managed to claim a title as the Best Act Ever over the likes of Britters and U2. But then Britters and U2 weren’t the subject of The Most Annoying Internet Meme of 2007, were they?

You’d think this news would be sufficient to get Mr Astley over to Liverpool for the awards, but sadly he couldn’t be there to collect his award. He obviously wasn’t aware that it was a bloody miracle he’d been invited to an awards show post-1988, and presumably isn’t aware that he will never get the chance to go to an awards show ever again, unless he starts entering competitions on local radio. Poor Rick.