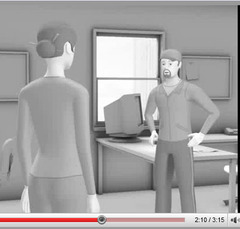 This seems to be the week in which everyone bands together to be rude about internet consultants. A couple of vids doing the rounds on Twitter show meetings between a business manager and social media consultant and then, in another version,with a cloud consultant. It’s a similar set-up on each occasion: the business manager is green and clueless, the net guru is an arrogant cowboy.

NSFW generally, gems from the social media guru include “I bore of your analogue attitude” and “I have an internet blog and everything, in layman’s terms that means I’m super fucking awesome.”

The man behind it the Social Media Guru film, markhamnolan says the character in his videos seems to have struck a note with watchers:

“A lot of people claim that they know this guy. There is no actual guy, he’s an amalgam of a hundred different half-assed guru-wannabes Ive encountered online and in real life. For every one good guy, there seems to be ten cowboys.”

Both videos use the Xtranormal video blogging technology we mentioned a few weeks ago.

This is the Social Media one:

This is the one with the Cloud Consultant. Also lols, from Samj Includes a detailed discussion of Amazon’s business plan and the line, “Larry wouldn’t know a cloud if it sat on his face.”