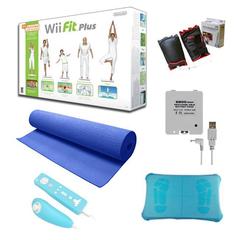 No, Nintendo haven’t invented dog tennis – but they have invented a way to let you to hook little Fido up to the Wii Fit. He doesn’t actually get to play games, or even do any dog specific exercises, but you can weigh him and see how his diet is doing.

The key feature of the original Wii Fit game is the plastic Wii Balance board, which doubles up as a game controller, calorie burn counter, and now in the new Wii Fit Plus game it also serves as a weighing machine for your pet.

You can also create a Mii avatar for your dog. I think that’s something we’ve all wanted to do for a while.

Other features of the Wii Fit Plus are 20 new activities, including skateboarding and a Segway course. There’s also more control over exercise schedules with the ability to set workouts to any duration in five-minute intervals up to an hour, and with users able to choose from specialized routines that focus on specific fitness goals or target areas.

Players can also now see an estimated amount of calories burned during each workout while tracking their overall progress.

So this little package promises fun and a healthy dog.

Wii Fit Plus currently available from Overstock for £123.40

Related: Make your Wii workout harder with Thrustmaster fitness gadgets & Everyone Wants to be like the Wii