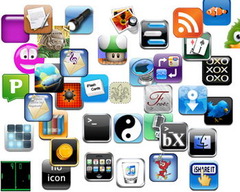 Well, can you? This is one of those of those questions where some people say yes, some say no, others say maybe and the vast majority are just like, wtf are you asking this ridiculous question anyway.

Well, we love silly questions like this so of course we’re diving in. And besides, USA Today stirred up the whole debate with an article “Are you addicted to Apple iPhone’s ubiquitous apps?”. They cite the case of Beth Akins, 54, of Louisville, who can’t get out of bed in the morning without switching on her Shake & Spell iPhone app.

“I usually play before I even get out of bed,” Beth tells the paper, saying that day without Shake & Spell leaves her with feelings of withdrawal. “I play every day.”

It’s a syndrome that the LA Times calls appiphilia – a word they define as “the irresistible urge to download iPhone applications”. (We’ll let it stand for Android, Blackberry and other app stores too..)

So does that count as an addiction then? Well, apps can be like.. errr… heroin in that you keep wanting more, but then again, they are unlike heroin in almost all other ways.

ReadWriteWeb suggest that downloading apps does not in fact have an impact on your health. We agree with them. Though of course, app-buying can have an impact on your spending money. When the apps are free it’s one thing – but when they start getting to £2 a pop, an app binge has financial implications and that’s when I start to notice it.

As far as health and social life are concerned… I’m just making damn sure I don’t download Spell & Shake if that’s how compulsive it is.

Related: Facebook addiction linked to owning breasts and a uterus & Have you got Internet addiction, test yourself

One thought on “Can you get addicted to iPhone apps?”