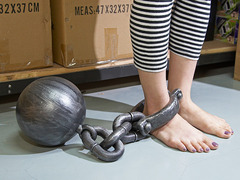 Ah Hallowe’en. The time when wearing weird things is considered normal. Gadgeteers Brando are offering a few trinkets to help you up your game this Hallowe’en party.

Referencing the Japanese teen trend for Cosplay… which in case you didn’t know is dressing-up mixed with role-play and made into an art-form (see Wikipedia here)… Brando have released some easy-to-wear leg shackle-balls.

Accessorise with that old sheet, or a full-on eighteenth century dandy outfit complete with the velveteen . Or just dress up as a manga character why don’t you?

The selling point of these particular shackles is their realistic appearance, no they aren’t real metal but they (sort of) look like it. The chain is 45cm long allowing some wiggle room and the opportunity to dance, and the sizeable ball is 16cm in diameter.

But don’t just consider this as a one-off expense for Hallowe’en… join your local Cosplay society and you could be wearing this Shackle Ball out every Saturday night.

The Shackles cost $18.90 from Brando and worldwide shipping is available.