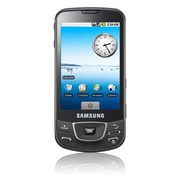 It’s no secret in the office that I’m a huge fan of the T Mobile G1, the first phone to utilise the Android OS. It’s such a lovely interface to use and were the G1 slightly more stylish I’d proudly wear it round my beck like a Japanese tourist. Well Samsung is stepping up to the Android challenge, installing it on its soon to be released i7500. But how will it fare against the soon to be released HTC Magic?

You can look forward to a 3.2 inch AMOLED touchscreen (which will means super sharp colours), a much improved camera, and the usual 3G, Wi-Fi and Bluetooth. The camera has been bumped up to 5 megapixels and includes auto-focus and a variety of image modes.

You also get 8GB of internal memory (expandable with a microSD) and the phone can play a variety of files, including MP3, WMA and AAC. I’m really excited that they’ve given it a 3.5mm headphone jack, which means you can use your own ‘phones with it, rather than the rubbish pair they come packaged with.

Stylewise the phone doesn’t quite cut it, as the design looks pretty basic, but perhaps it’s better in person…

£ to be determined, from June at Samsung [via Crave]