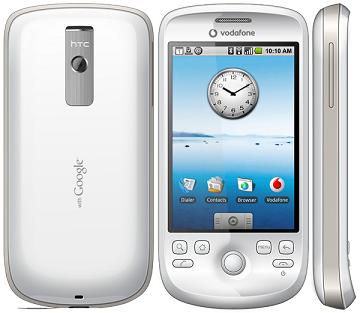 So, it turns out the G2 isn’t actually called the G2 – it’s been dubbed the HTC Magic. And it would appear a change of name isn’t all that’s on the agenda for the G1’s successor. Word is, T-Mobile’s been kicked to the curb in favour of Vodafone, which now gets to poke its tongue out at the other networks for being given full exclusivity rights. And Vodafone has a lot to be smiling about. Not only has the Magic pledged allegiance to its network, but this also means Vodafone has scooped the first full touchscreen Android phone.

It also turns out the rumours and leaked product shots were practically spot-on. Yes, the Magic has lost the ‘sshhwiip’ the G1 possessed, which to those of you who didn’t watch Susi’s review, means the Magic has done away with the slide out keyboard. There’s also a 3.2 HVGA screen, 3.2 megapixel camera, HSDPA, GPS, a G1 style trackball and it’ll be running Cupcake. Oh, and there’s still no 3.5mm jack!

It’s tipped for an April release, so perhaps you could forego Easter eggs this year, in favour of a more magical gadgety treat.