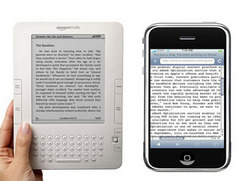 The dust hasn’t even settled on the recently revealed Kindle 2 announcement and Amazon is already giving us something else Kindle based to gossip about like a load of old bints at bingo. The news is that the iPhone is getting a Kindle injection, as Amazon has just announced its plans for the Kindle for iPhone app. Apparently, Amazon is “not at all concerned” that it might stop people buying the Kindle, which wouldn’t be a problem for us anyway as it hasn’t made it over to the UK yet.

All die-hard book reading fans need to do is buy their books via their browsers on the world wide web, then transfer them wirelessly to a specially designed app to be viewed on the iPhone’s 3.5-inch screen. You even get to take the first few chapters for a test drive absolutely free of charge before deciding if it’s a literary great or a title destined for the bargain bin. Did I mention the app is free too. For those who can’t get enough Kindle play, you’ll be able to keep track of your page across both devices, to save you trawling through copious amounts of text before you reach familiar territory.

Sadly, like many many gadgety greats, this one is US bound for the time being. But with promises of the Kindle 2 coming over to our shores, surely the iPhone app couldn’t be too far behind?

Like this? Read these: Full specs of the Kindle 2 revealed… and the changes are mostly superficial| Kindle 2 rumours fly