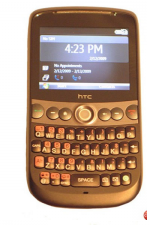 It seems like HTC may be taking style tips from BlackBerry as pictures of a similar looking device have just surfaced. The model name has been reported as Maple, which would seem to be implied by the (presumably fake) wood grain finish.

It’s touted to be another Windows Mobile device, and should have the highly anticipated Inner Circle feature form HTC. This is software that prioritises communication from different groups of people and presumably gives work contacts a separate ring tone from your mates. Whether or not this will actually enhance functionality is debatable, (what happens when contacts become friends?).

The Maple surprisingly DOESN’T have a touch screen though, but does feature a RIM style navigational trackball. It’s also only got a 2 megapixel camera, which is disappointing. Then again, it is a business handset so the camera isn’t too important.

I’m surprised they’ve moved away from their impressive TouchFlo interface and wonder whether this model will impress, considering what it has to live up to.