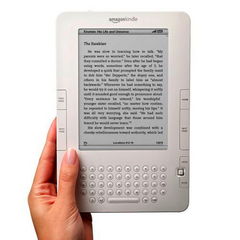 I like the Kindle. OK, it’s not available in the UK (with no plans to get here any time soon) but it’s a great example of what manufacturers can produce if they start addressing what people actually want.

And we’re talking basic functionality here, with a usable device that has readers worldwide being able to carry a large part of their library with them. It far surpasses the Sony Reader because of its wireless capabilities, but has lost fans due to its rather clunky styling and poor battery life

Well they’ve updated the design to give it an iPod-esque feel with rounded contours and and have moved around some of the controls to make it a lot more intuitive. They’ve also upped the page shades- moving from four shades of eInk to a whopping 16! This puts it on par with the extremely overpriced Iliad and means you’ll get the least strain on your eyes. So far so good, but what else are they offering us?

Well the price point has sadly remained the same, which will still put it out of most people’s grasp, as $359 is a serious wad of cash. However dedicated readers will still sign up, and they’ll love that page turns have now been optimized so they’re 20% faster as slow refresh mode on eBooks is a serious bugaboo. 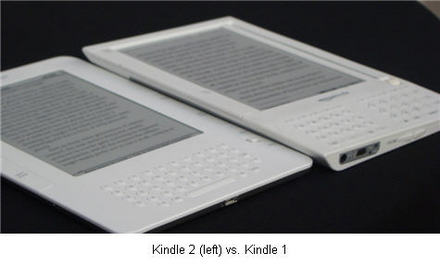 They’ve also upped the internal storage to 2GB from the paltry 185MB, but the downside is they’re removed the SD card slot so you can’t expand it. Battery has been upped 25% to allow you to take longer between charges and they’ve slimmed it down to 9mm.

They’ve added in a Read to Me feature which lets a tinny style voice read your books aloud- useful when driving, but rather awful at any other time. I’m pretty jealous of the enhanced Whispernet, which lets you download books to the Kindle on the Amazon wireless network, but other than speeding it up a little it remains pretty much the same.

So what’s the verdict? Well I’m impressed by the addition of extra eInk shades, and I like the expanded internal memory and rounded contours, but I’d like to see a UK release date, accessibility for more file formats (mainly LIT) and for the font to change to fit the style of downloaded newspapers/magazines. Overall, they’re doing well, so hopefully the Kindle 3 will build on these points.

Related: The battle of the eBooks