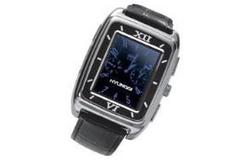 Hyundai’s been getting very involved in the technological arena of late. First it’s a slew of handsets – and not too impressive ones at that – including the one with the dolphin integrated into its surface. Now it’s tackling the mobile phone again… rugby tackling. That’s right, joining LG, Phenom and Sony Ericsson and the battle to bring down the mobile, it’s Hyundai and the err… Hyundai (real inventive guys).

It’s not a 3G device, instead it offers GPRS connectivity. It’s still a triband device (900/1800/1900 MHz) though, so it’ll work with lots of different types of networks around the globe. But it is a touch display contraption, which will give you plenty of points in the cool department.

There seems to be a bit of name poaching going on Hyundai’s behalf, or rather “a complete coincidence” as a Hyundai spokesman said. The phone/watch mashup also goes by the name 910 just like its LG rival. The only difference being the alpha part of the alphanumeric portmanteau (LG – GD910 and Hyundai – MB910)

Spec-wise it boasts 70 hours of standby time, email, video playback, and music player capabilities. It weighs only 58 grams and is due to hit the shops come June (and hopefully the beginning of a great summer). Priced at £200 SIM-free, the MB910 is certainly is more realistically attainable compared to the £500 price tag LG slapped on their model.