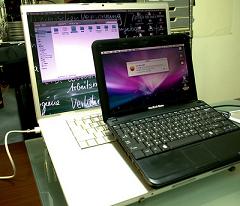 There’s been a lot of back and fourth in the will they/won’t they department regarding an Apple netbook. Apple fanboys with copious amounts of spare time have even been mocking up their very own teaser versions and publishing pictures online, much to the resentment of other Apple fans who simply can’t dedicate their life to worshipping the ubiquitous brand.

The latest in the will they/won’t they saga, suggests they certainly will be bringing an Apple netbook to the table. Apple is apparently working with a company called Wintek, to produce a fleet of 10-inch touchscreens for its supposed and much anticipated netbook. Word is, it could even be launching as soon as the second half of the year.

This certainly is a delectable bit of news isn’t it? Hands up who’s excited? I wonder what they’re going to cram it with? Are they going to take it down a peg and move out of high-end territory, so it’s on par with the slew of netbooks currently dominating the market? Or is it going to retain that high-class superiority it’s become renowned for by packing a bunch of high-end components into its tiny frame? We have not a clue, but we sure are waiting on the edge of our seats and looking forward to finding out.