When you think Hyundai, you think cars right (and not very good ones at that)? In this particular instance, Hyundai represents mobile phones. Did we mention Hyundai does phones now? Yea, it was quite shocking to us too. So, this is the motor brand’s flagship model, aptly named the dolphin (or MB-490i if you want to get technical). Why is this apt? Because (similar to magic eye) if you stare at the side of the phone for long enough, you will start to see a dolphin – a very square dolphin, but a dolphin nonetheless. Basically, there’s enough resemblance (even if it is slight) to understand where Hyundai was coming from when brainstorming this idea.

The back even has a rippled water effect, to add to the handsets amphibious theme and more importantly, to make the dolphin feel at home.

So what were Hyundai’s reasons for naming their phone after those friendly amphibians? Simply, because “everyone loves dolphin’s” (of course)! It turns out though, that this isn’t a very well connected dolphin. There’s no 3G or WiFi – Tri-band GSM, GPRS and Edge are your only connectivity options. There’s a 3 megapixel camera on board though, but no word of under water capabilities – which is very un-dolphin friendly indeed. It also packs a speaker system courtesy of Yamaha, so expect quality and clarity when it comes to music listening, as well as Bluetooth and FM radio.

We have no official release date, but rest assured it will be coming to the UK.

Isn’t it weird that the more times you say dolphin, the more it sounds like a made-up word. 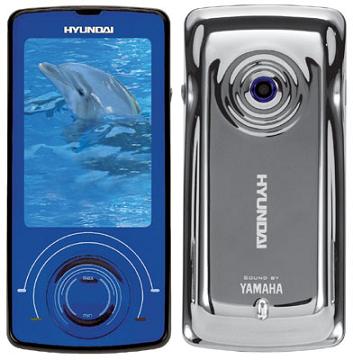