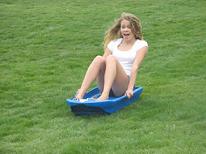 Did you miss out on all that sledding action a few weeks ago because you were one of those unfortunates who’s journey to work wasn’t badly affected by the white stuff or you were equipped enough to work from home? It sucked, didn’t it? But never fear, there is still a way to have some traditional snow related fun (minus the snow) with the Slicer. With a name like that I’d be a little apprehensive about taking a ride, but as soon as you hear what it does, all fears will go straight out the window.

Simply take its ice-block-forming trays from your freezer, clip them into the bottom of your summer sled, to create what sounds like a great way to spend a pleasant summers day. And if you can ignore the sun beaming down on your back, it’ll be just like spending the day in the snow… well, minus the snow, the snowball fights, and general freezing your ass off, of course. The girl in the picture gives the impression a certain degree of alcohol is involved, but maybe, just maybe she really is just having *that much* fun.

Technically, the Slicer isn’t a gadget, but it does require a freezer to produce the ice blocks, which still doesn’t make it a gadget but there’s a close enough connection for it to feature on the site, right?

The fact that it’s been created by a company called Ice Meister is reason enough to buy it, don’t you think? Get it here for $70 USD. 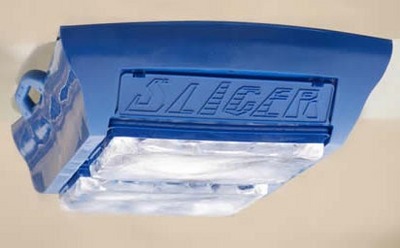 Like this? Read this: Slegoon – sledding with a twist for the more affluent