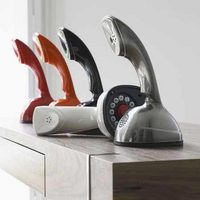 Landlines are now generally acknowledged to only be useful to parents, and that now quite annoying couple in the BT adverts (Will they? Won’t they? Ah, the modern and yet still incredibly dull family dramas). Having said that, the Scandiphone makes me almost tempted to tether myself to a phone socket.

Originally popular in the early 60s, this modern version has push buttons (push buttons! Oh, the things they think of now a-days!). It’s available in red, black, orange, cream and my own personal favourite, brushed chrome. Screw it, where’s that BT number?