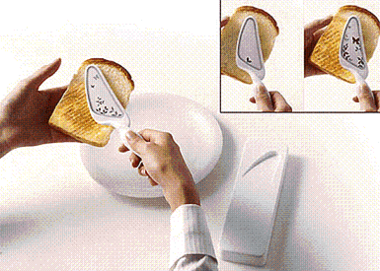 Hands up who works in a building that denies you of your basic human right to have toast, by prohibiting the use of toasters anywhere in the edifice? I bet you’re thinking being denied the right to toast just couldn’t be humanly possible? Think again – at the new Shiny Towers, the health and safety officials are anal… NO TOASTERS ALLOWED. If toast didn’t have such a distinct smell, I’d happily toast bread all day long underneath my desk (damn you toast and your unique yummy aroma). This is where the Portable Toaster comes in. It may look one of those utensils you use to serve gateau, but this is your portable toasting tool.

As demonstrated in the picture, you press the cake knife thingy into the bread, toasting it to your satisfaction. And just in case you’re unsure what well toasted bread looks like, the portable toaster flashes up animated graphics to indicate how well your bread has been toasted and how long you’ve been pressing the utensil into your bread.

The only thing is by the time you’ve covered all areas on both sides, it’s probably more than likely your toast will be stone cold – unless it brands your toast at impressive speed. Apparently, just like conventional toasters, the PT will give you something worth spreading your Marmite all over in just two to three minutes. But considering there’s no indication as to how hot it actually gets, this has to be taken with a pinch of salt. I mean, it can’t be too hot – the health and safety risks would be too high. In fact, it’s probably best the accident prone steer clear of this one all together.

If you’re wondering where it gets its heat from, it’s produced using nanotechnology which uses molecular sized tubes of carbon that heat up. I’m, no scientist so I don’t know how this process generates heat, but according to creator Kim Been, this is how it works.

I so could have done with one of these after being handed a loaf of Warbutons bread at Charing Cross this morning.

Like this? Read these: Toasting bread will never be the same again with the Toaster trebuchet| Kettle + Toaster = Space Saving genius! Thumbs up for the Breville iKon