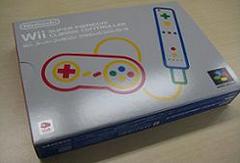 Last year, this nostalgic wonderment appeared on the market for modern gamers with an old skool heart. Sadly, its availability only stretched as far as Japan, which to be honest was a little unfair – they get everything, our eager western hands get nothing (well that’s not entirely true)! But now, thanks to the global phenomenon that is global commerce, we can inject some SNES action into our Wii game playing too, just like our Japanese gaming obsessed friends, with the Wii-compatible SNES pad.

The Club Nintendo Edition Super Famicom Controller will set you back $75 USD, which isn’t exactly chump change, but who said old skool was cheap? If you want vintage you’ve got to be prepared to pay.