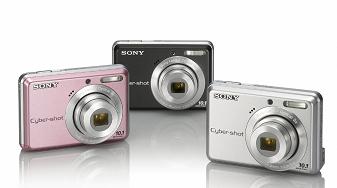 A mere 6 weeks after CES and Sony are already upping their ante with the news of at least five new models.Yes, I think that’s a rather huge number as well, but perhaps hidden within the overflowing release will be some cameras I’ll get excited about.

First to the table are the T900 and T90, which boast 12.1 megapixels and a ‘Chic, ultra-slim design’, which I guess means they’re a small shiny camera. They feature a Carl Zeiss lens, a large 3.5 inch touchscreen (3 inches on the T90) and enhanced smile and face detection. I like the fact they’ve included Intelligent Scene recognition, and it will record 720p HD movie clips. They’re available in a variety of colour options, and they use the Sony Bionz processor for quick replay time.

Next up we have the nattily titled W270. This is another 12.1 megapixel baby, but this one features an impressive 28mm wide angle lens. You also get enhanced face detection and HD recording, which is standard on all the new cameras bar one. It will set you back £239.

Fourth in line for the throne is the H20, which clocks in at 10.1 megapixels with a retail price of £269. This has Optical Steady Shot to keep your picture from blurring, great for getting in focus shots at the end of a heavy night. It also has a whopping 10x optical zoom, for impressive picture quality.

And last we have the S930, touted as their value camera. It clocks in at £99 and you’ll be getting a 10.1 megapixel camera with a 2.4 inch screen and the usual face detection malarkey. The reason for the lower pricepoint is due to the fact there’s no HD recording, so it will be an attractive option for people who don’t tend to take regular video footage of their friends emulating Jackass.

All will be available from March/April this year.