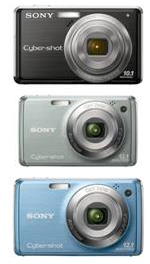 There’s nothing to shout about when it comes to the latest batch of Cyber-shot cameras from Sony, but that’s not to say they’re rubbish either – in fact, they’re somewhere between excellent and bog-standard. They’re no Cyber-shot G3, but they are nice and probably won’t cost as much (as long as you don’t mind uploading pics straight to the net via your PC as opposed to your camera).

The Cyber-shot S950 shares many similarities with the W range, such as 4x optical zoom and 2.7-inch screen and SteadyShot, but doesn’t come in as much colours – only black and silver . It also doesn’t have as much megapixels stored under its outer shell. It does however, use one of Sony’s own lenses.

All three will be available as of next month – pricing to be confirmed.