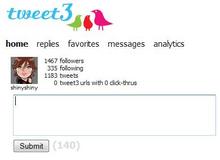 From our poll on what people are using Twitter for, it seems there’s a few people out there who have more than one Twitter account (I’ve got four. Which is, perhaps, overkill) and the main complaint is that it’s really difficult to keep track of them. I’ve resorted to using Tweetdeck for the @ShinyShiny account, and Twitterific for my personal account, but my computer isn’t a fan of this method.

It’s not perfect – I would have liked to see tabs rather than clickable links between accounts, but features such as being able to change the background colour of each account does make it easier to keep track of. It’s still not massively attractive though.

There’s also the ability to specify which Tweets get sent to Facebook, which is bloody genius – there’s nothing worse than seeing the same info over and again if you follow someone on both Twitter and Facebook.

I’m not a fan of browser-based Twittering, so it’s not for me, but as soon as they develop a desktop client, I’m all over it.