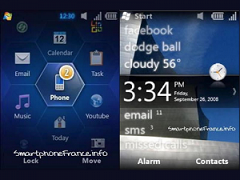 If like Dan over at Tech Digest, you have a certain level of detestation for Windows Mobile, just skip onto the next post – this is all about ‘Life Without Walls’. So, according to current web tittle-tattle, the next iteration of the Windows Mobile OS could land as soon as Q3 this year. That means Windows Mobile 6.5 enabled handsets could be on the shelves come September. Subsequently, version 7 could follow and make an appearance as soon as April 2010 as well (which we only know thanks to a slip-up by Motorola’s CEO that it’s due in 2010).

If there’s any truth in these claims, this means the code for Windows Mobile 6.5 could be officially let loose onto the mobile phone market over the next eight to ten weeks, giving Windows Mobile OS aficionados something to look forward to and mobile manufactures enough time to turn around a slew of WinMo 6.5 handsets.

Actual details are somewhat sparse as to the actual workings of the latest Windows OS, but all will be revealed over time. Let’s all just keep our fingers crossed for multi-touch, gesture recognition and just all-round touchscreen straightforwardness (if enough of us do it, it might actually work). Hopefully, more will be revealed next week at MWC.

Take a look at the latest phones here