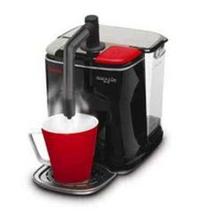 There’s nothing like a hot cup of tea to help you get through your day (or in my case hot Ribena). Now, the Tefal Quick Cup caused quite a stir when it made its debut into the mainstream. ‘Is it actually a kettle?’ was probably the most frequently asked question – which is fair enough considering it doesn’t actually boil. You had those who took an abhorrent liking to it and those for which the Quick Cup revolutionised their tea drinking lives.

Well if you thought having the ability to whip up a cup of tea in 3 seconds and save on the leccy bill, using a device that comes in a neat and easy to use package was impressive, prepare for your jaw to hit the floor. Introducing the Quick Cup Deluxe – the newer, smarter and sleeker version of the Tefal Quick Cup.

The Deluxe model works in exactly the same way, so you can still save around 65 percent of the energy used by bog-standard kettles, which according to Tefal will save you £80 on energy and water bills throughout the year. The biggest difference between the two is the design. While the design of the Quick Cup was pretty nice, the Deluxe’s appearance is a little more suave then that. It comes in either red, black or a stainless steel finish and now comes with an adjustable tap, anti-splash spout and drip tray for minimal mess and an easier dispensing mechanism.