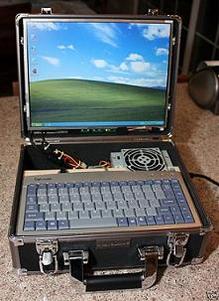 If ever there was an incredibly futile and senseless contraption, the netbook in a suitcase is it. In fact, if there was a prize going for the most useless or preposterously outlandish or waste of space gadgetry this’d be a sure fire winner. What was its creator thinking (or on?). I think somewhere along the line, they thought to themselves “hmmm, now how can I make the netbook less portable, to the point where it’s not even comfortably transportable. Oooh, and what if I make it heavier and basically transform it into something that is in direct opposition to everything the netbook stands for?”

The result? A netbook in a suitcase dubbed “The Poor Mans Netbook”. And it’s not even a nice suitcase… or netbook for that matter. It’s been put together using netbook components, an old skool keyboard and a 14.2-inch LCD screen. It doesn’t seem to quite get the basic philosophy of a netbook and fails on practically every aspect of the little UMPC. Convenience – fail, netbook functionality – FAIL, portability – double fail.

I don’t get it. I’ve heard of being opposed to something, but this is just taking the biscuit. If you hate netbooks so much, get a desktop PC, or stick to newspapers and magazines, don’t make it harder on yourself just because you want to be different.

Apparently it’s selling on eBay, so if you manage to track it down, let us know. We’d love to know how much ‘The Poor Mans Netbook’ is going for.

More random stuff here, or alternatively you can check out the latest netbooks here