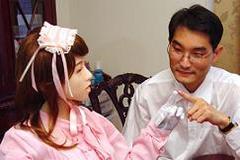 She has the kind of figure, women punish themselves to achieve (think Jessica Rabbit), she remembers your favourite drink and can have an orgasm on demand. She’ll also be polite to your family (so no family rows about “your intentions with my son”), she’ll work for 24 hours – so essentially until the batteries are removed – and she’s apparently great with directions. Sounds like an ideal women eh boys? The only problem is, she’s not real – she’s a robot. Her creator, who is either a very *very* lonely man, an unlucky in love victim or a straight up weirdo, justified his creation by claiming he doesn’t have the time to find a real girlfriend. £14,000 later, Aiko (which means love child in Japanese) was introduced to the world.

Despite the denial, the fact his robot lover can have an orgasm on demand, suggests he’s doing questionable things with his robot girlfriend, which I’m not going to lie, creeps me out just a little bit.

Who knows – maybe some kind of Pinocchio-esque miracle will take place and the fairy who granted Pinocchio’s wish might just pay Aiko a visit and turn her into a real woman. But only if she’s been a good little robot of course.