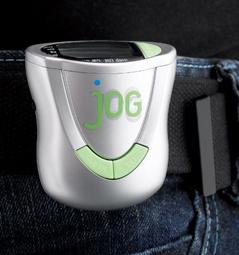 Trying to make gamers fit can be a huge money spinner for the games companies, and everyone is trying to create the next Wii fit. Well jOG On seems like a possible contender to that throne as it’s a cheaper alternative which requires you to keep moving to stay in the game.

Simply attach this pimped up pedometer to your console, and the attachment clips onto your belt for a game that is as active as it’s entertaining.

So how does this work?

Well the jOG detects if your player is moving the game, and every time they take a step you have to- or you’ll be frozen out of the game play. It only works with movement, so other aspects such as direction/ weapons/ flame throwing etc is still controlled by the game pad.

They’ve just a released a version that’s compatible with the PS2 with the Wii model being released later this year. It’s a great way to help make people more active, and will also add a whole new level of interaction to standard games.