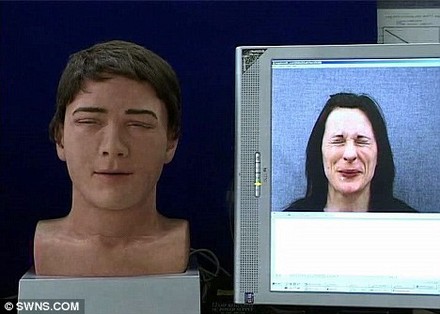 Robotics is an area which is expanding in leaps and bounds and I’ve never seen anything quite like this humanoid robot before. Unless of course you count I Robot, but CGI films are hardly a good example. The robot you can see is called Jules, and is the first robot that can actually MIMIC human expressions realistically. He picks up these expressions through the electronic motors on his skin which are connected to a video camera. He reads the camera motions in real time and interprets the commands and changes in expression at 25 frames per second.

So how did we get to this level of ingenuity? You can thank a team of engineers from the University of Bristol for Jules, as they created him for a project entitled ‘Human-Robot Interaction’. They created the software to help make robots more approachable, as the idea is that long-term robots will develop to a level where they’ll be able to assist in hospitals or theatres, and even in space. Jules has 34 internal motors that help control the facial expressions that you can see, and they work with an intelligent coating of flexible rubber skin that covers his face.

Jules has a repertoire of ten stock human emotions, including happiness, sadness and concern and in the video below you can see how scarily lifelike he is. Is this the beginning of an android future?