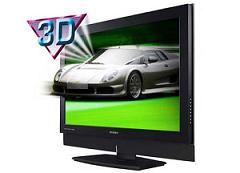 It’s probably fair to say, acquiring tickets to the 2012 Olympics is going to be no mean feat. But fear not people, there is another option worth thinking about, courtesy of Sky. Ok, so we know 3D TV in our living rooms is (allegedly) imminent, so this means those clever folk over in Sky Towers are working on a way to bring us the Olympics in 3D action too.

Sky admits 3D TV is unlikely to hit your living room any time soon but is preparing for the move to pop out TV, by starting with a demo, showcasing sports such as football and boxing. And unlike other 3D enabled goggle boxes that require you to wear special gadgety looking glasses, Sky’s 3DTV works on a stereoscopic 3D approach. This still requires 3D glasses, but instead, they’ll be more akin to a pair of sunglasses (wouldn’t it be call if they were Ray Bans?) rather than futuristic looking ones. This also means you’ll be able to get the 3D viewing experience from anywhere in the room (and you won’t look strange). You will need to buy a new 3D TV, but it should make you feel better to know Sky used an existing HD box and dish during the demo, so you shouldn’t have to fork out for expensive upgrades.

The company has already started filming events in 3D and the head of Product Design said: “There is a very good chance you’ll see the London Olympics in 3D”. It was also revealed that a major manufacturer will be unveiling a stereoscopic 3D TV in the next 12 months, with the hint that it could be Sony at CES.

So, Sky has outlined its vision but they important question remains – will they pull it off? Well, considering there aren’t any TV’s on the market to support it, don’t expect it any time soon. But in four to five years – perhaps. As the saying goes, only time will tell.

Like this? Read this: Bring TV to life and don’t break the bank with the IZ3D monitor