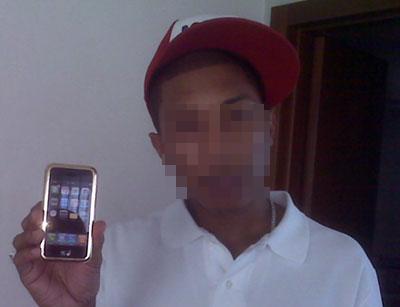 Looks like someone’s been to see Jacob the jeweller. They call him Skateboard P, but can you guess who the red hatted one is posing with the 19 karat iPhone?

Now this guy is a nerd in every sense of the word (hey that rhymes). His music production company is named after one of the planets – specifically the one that’s 17 times the mass of Earth – and he likes to sing about girls waiting in line for the bathroom. He’s a hot commodity in his line of work, with loads of famous artists practically throwing money at him to make their next track a hit. Oh, and he’s also “a PC, like BG”.

Got it? Ok, one more hint. His group did a track which featured Alesha Dixon in the video, sparking rumours that she was cheating on her boyfriend (which ironically, he did the year after) with lyrics such as: ‘Mister! Look at your girl, she loves it! (I know you love it girl) I can see it in her eyes. She – hopes this lasts forever’.

Find out who he is after the jump… 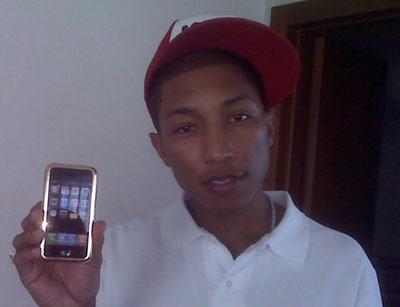 It’s Pharrell from N.E.R.D and the Neptunes. Pharell used to be a real geek back in high school, and no doubt got the piss taken out of him on a regular basis, maybe even the odd wedgie. And being in the marching band probably didn’t help. But who’s laughing now? He has an 18 karat gold iPhone and one of the greatest musical careers ever.

This guy has so much money he could probably afford to give every gadget he owns a golden conversion – although that would be very tacky. Let’s hope it’s just his iPhone he’s given a fabulous makeover to. Although, considering he’s a celebrity with so much money it’s coming out his ears, he’s probably the owner of many a golden gadget. In fact, the man probably has a room full of gadgets dripping with diamonds and equally expensive stones and materials.