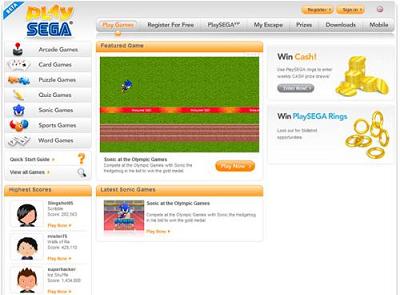 Sega understands there’s a great deal of us who often wished they could regress back to the days of the Megadrive and get down to a serious Sonic marathon. Sadly, the Megadrive isn’t making a comeback (sorry if I got your hopes up), but some of the games are. Sega has just launched PlaySega – its very own gaming website full of Megadrive classics, DS titles, mobile and flash games. Oh, and did I mention it’s free?

There’s a selection of games on offer, including Brain Assist (DS title), the mobile version of Mario and Sonic At The Olympic Games and a range of “arcade, word, card, puzzle, quiz, Sonic and sports titles”. Games from the Megadrive era are also promised – the games Sonic The Hedgehog and Puyo Pop have been mentioned. It would appear, the more vintage the game the more highly regarded the game playing, hence the reason for a VIP section, which is coming very soon along with the more notable titles. This is where the free element of the website reaches its limit. Sega says the site’s free, but the best stuff comes at a small price. Hopefully the “small charge” Sega promises actually means small charge.

Apparently, Sega has a locked vault full of retro Sega classics in Japan and they’ve been given full access to a lot of the properties in it. So isn’t it nice of them to share it with gaming geeks all over the world? This is great news for those of you who don’t get the big brother treatment at work. What a great way to make the end of the day reach its arrival time quicker? You can even create your own online avatar and use the PlaySega Rings as currency to customise the site or be used to enter a weekly prize draw. Something tells me more social networking features will be making their way to the site in the foreseeable future.