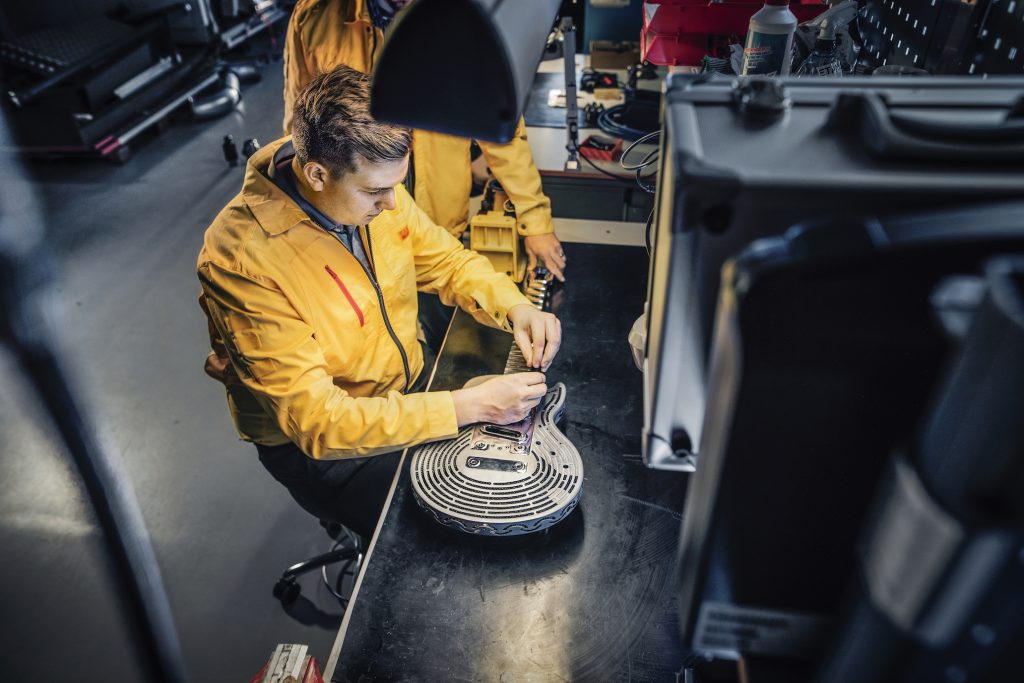 Rock stars have been smashing guitars for decades. However, Sandvik has created what it claims is the word’s first smash-proof 3D printed guitar!

To demonstrate its unbreakability, the global engineering company gave the instrument to Swedish-born guitar virtuoso Yngwie Malmsteen. Named one of the ten greatest electric guitar players in the world by TIME Magazine, Malmsteen is well known for his virtuoso performances – as well as the fury he unleashes on his guitars. A master of neo-classical heavy metal, he has produced 30 albums and has been smashing guitars onstage for over 30 years!

For the guitar’s 3D printing designs, Sandvik relied on its expertise in metal powder and additive manufacturing. Lasers traced a design in beds of fine titanium powder, fusing layers of material one on top of the other. The layers, each thinner than a human hair, built up to make the body of the guitar.

“Additive manufacturing allows us to build highly complex designs in small production runs,” said Amelie Norrby, additive manufacturing engineer at Sandvik. “It lets us create lighter, stronger and more flexible components with internal structures that would be impossible to mill traditionally. And it is more sustainable because you only use the material you need for the component, minimizing waste.”

The next challenge was to strengthen the fret and neck as they extended into the guitar’s body. That solution took the form of a new, super-light lattice structure that was sandwiched between the guitar’s neck and fretboard. Made from hyper-duplex steel, a recent Sandvik innovation, the lattice structure is the strongest in the world for a given weight, claims Sandvik.

But the real test is whether the guitar is actually smash proof. Thankfully it does seem to be – at least so far.

Says Malmsteen: “This guitar is a beast! Sandvik are obviously on top of their game. They put the work in, they do their hours. The results are amazing. I gave everything I had, but it was impossible to smash.”

You can see how the world’s first smash-proof guitar was made in this YouTube video below:

– The guitar body was produced by additive manufacturing, or 3D printing, a technique involving laser-melting titanium powder in microscopically thin layers
– The guitar’s volume knobs and tailpiece which anchors the strings, were also created with 3D printing.
– Extra material was milled from between frets to meet Malmsteen’s preference for a scalloped fretboard.
– The back of the guitar’s neck is hollowed out from the inside and is only 1mm thick in places.
– Advanced software allowed Sandvik Coromant to simulate milling digitally before the first cut was made, enabling the correct choice of tools, saving manufacturing time and ensuring desirable outcomes.
– Made of hyper-duplex steel, the lattice structure inside the guitar neck is the strongest in the world.
– Before the guitar was built, Sandvik simulated potential impact forces in the same way as car makers digitally crash-test new models.