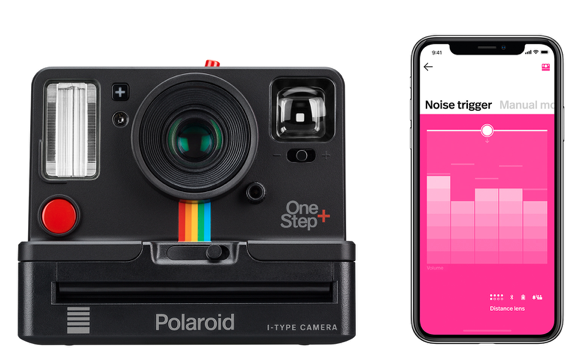 The Polaroid OneStep+ is a natural evolution of the OneStep 2, claims Polaroid, introducing new features to the camera’s nostalgic design to bring more creative potential to instant photography. First up, a new portrait lens complements the camera’s standard lens, allowing users to to shoot from as close as 1ft away.

The OneStep+ also connects via Bluetooth to the new Polaroid Originals smartphone app. OneStep+ is rendered in a slick black colourway, and the addition of a new rainbow stripe on the camera’s faceplate pays homage to the iconic design of the original OneStep camera from 1977

Double Exposure: Capture two photos in a single frame and create surreal, expressive compositions.
Light Painting: Turn a light source into your paintbrush, draw pictures in the air and capture them in the iconic Polaroid picture frame.
Self Timer: Create perfectly-timed photographs with up to a 25-second countdown.
Remote Trigger: Place the trigger button in the palm of your hand and never miss a group photo again.
Noise Trigger: Trigger the shutter at the clap of your hands, the splash of a pool or the bark of a dog to create dynamic action shots.
Manual Mode: Fine-tune your camera’s settings and master your craft by taking full control over aperture, shutter speed, flash intensity and photo ejection.

Polaroid created instant photography as we know it today with the launch of the breakthrough Polaroid SX-70 camera in 1972, followed by landmark innovations such as the original OneStep, colour instant film, and the Polaroid 600 and Spectra cameras and film formats. Artists who used and were inspired by these cameras, including Andy Warhol, Helmut Newton, Robert Mapplethorpe, Keith Haring and Guy Bourdin.