It’s official. The vinyl revival continues – well sort of. Yesterday the BBC reported the shock news that more money is now being spent on vinyl than on downloaded albums. Last week, vinyl sales made the record industry £2.4m, while downloads took in £2.1m, the Entertainment Retailers Association (ERA) said.

It marks a big shift in music consumption. In the same week last year, vinyl albums made £1.2m while digital ones made £4.4m. The reason for the shift? Downloads have been in sharp decline as consumers switch to streaming services like Deezer and Spotify while more money is being spent on records, partly because they are much nicer to wrap for Xmas than a download and are now being stocked in supermarkets, such as Sainsbury’s and Tesco’s.

Although vinyl still represents less than 2% of the overall music market, the touchy feely format has now shown eight consecutive years of growth since facing near extinction in 2007. Earlier this year, a BBC/ICM poll found that people who listened to music on streaming services were more likely to buy vinyl – often as a goodwill gesture to an artist they loved.

However, 48% of those surveyed said they did not play the vinyl they bought while astonishingly 7% did not even own a turntable! So as the vinyl revival continues we look at five turntables for under £100 that are definitely worth giving a spin this Xmas. 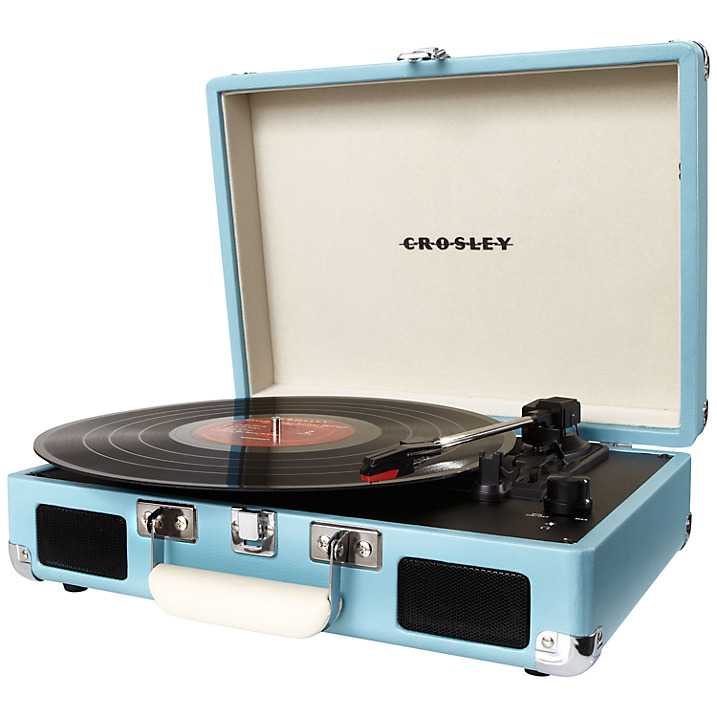 1. Crosley Cruiser Turntable With Three Speeds, Teal
Price: £61.74
From a brand that has been producing radios since the 1920s comes this beautifully styled retro player, available in two colours (an orangey red or this classy looking teal colour). Wrapped up in a briefcase styled record player, the three-speed (33,45 and 78RPM) hi-fi separate can easily be transported from place to place. What’s more, thanks to the built-in stereo speakers, you can listen to your music without having to connect it to a speaker system. Constructed from wood and bound together in a leatherette material, the record player folds up into a sturdy looking briefcase when not in use. There’s also a headphone socket for private listening. 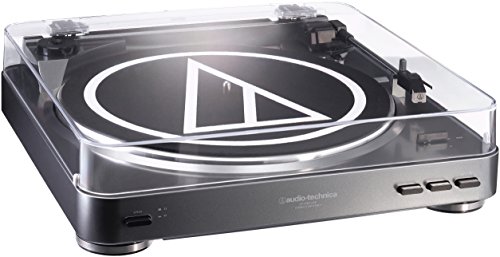 2. Audio-Technica AT-LP60 USB Turntable
Price: £99
Whereas most of the turntables in this round-up are quite retro looking and intended more for fun, the AT-LP60 from hi-fi specialist Audio Technica is both a more serious looking and serious sounding piece of kit. As well as being equipped with a USB output that allows direct connection to your computer, the system also boasts both Mac and PC compatible Audacity software, an integral dual-magnet Audio-Technica phono cartridge; and both a USB cable and adaptorcables. The turntable also features a built-in switchable phono/line preamp that allows connection to a stereo system equipped with either a phono or line-level input. 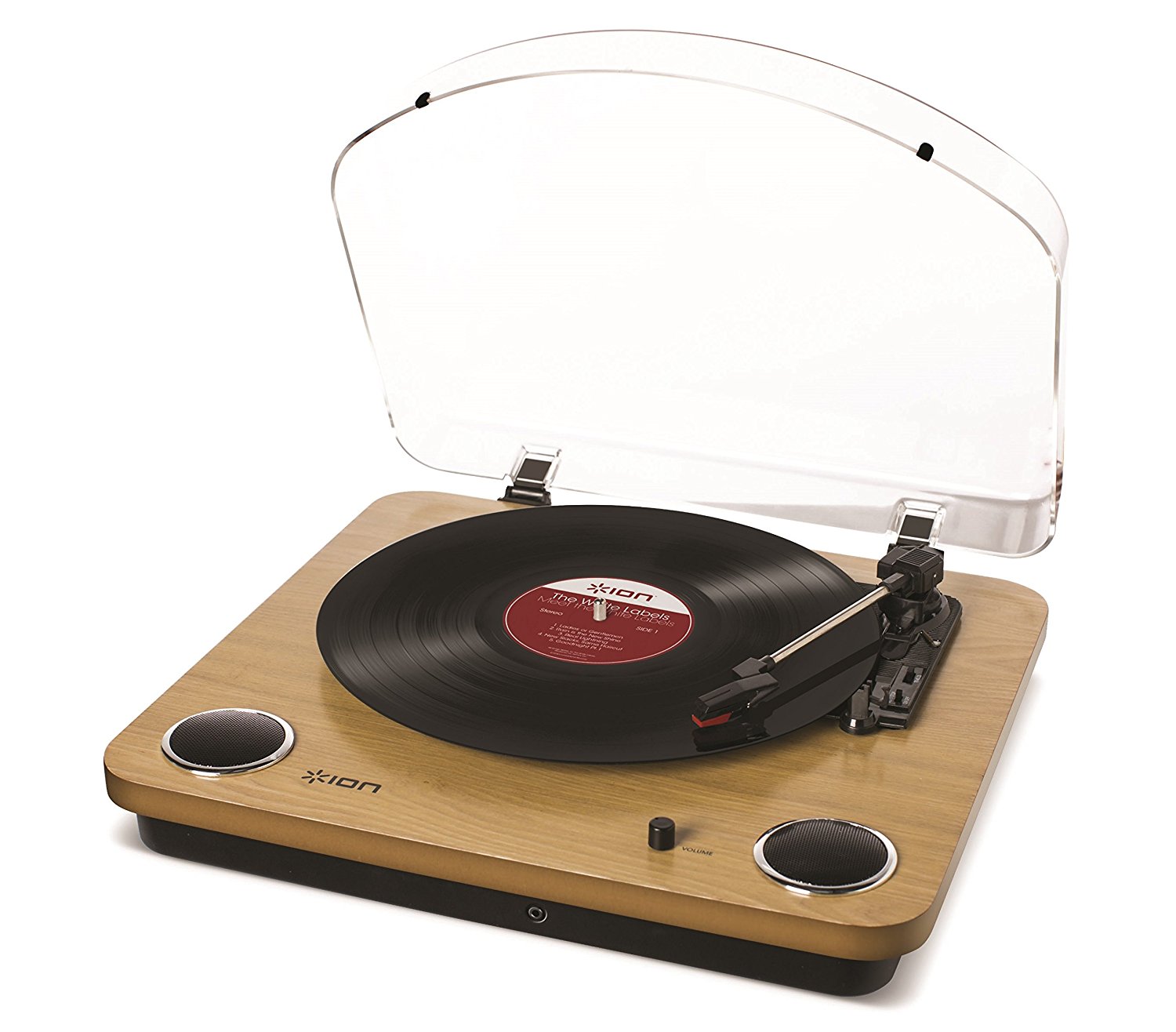 3. ION Audio Max LP | Belt-Drive Turntable with Built-in Stereo Speakers and USB Conversion – Wood
Price: £83
Here’s a turntable that’s available in two versions – either piano black or the wooden finish pictured above. We like the wooden look which gives it a suitable 1970s retro feel. There’s a three speed transmission so that it will play vinyl at 33, 45 and even 78 RPM.It’s also able to play 7″, 10″ and 12″ records as well as the newer 180 and 200 gramme records. For added convenience it also comes with built in speakers (not the best sound quality ever) and USB Conversion for transferring vinyl records onto MP3 if you so wish. It’s not the biggest turntable around (generally the bigger the better with turntables), but it does have a nice natural wood base and importantly the lid can close while spinning a record so no more dust on your vinyl. A headphone socket is also provided for private listening. 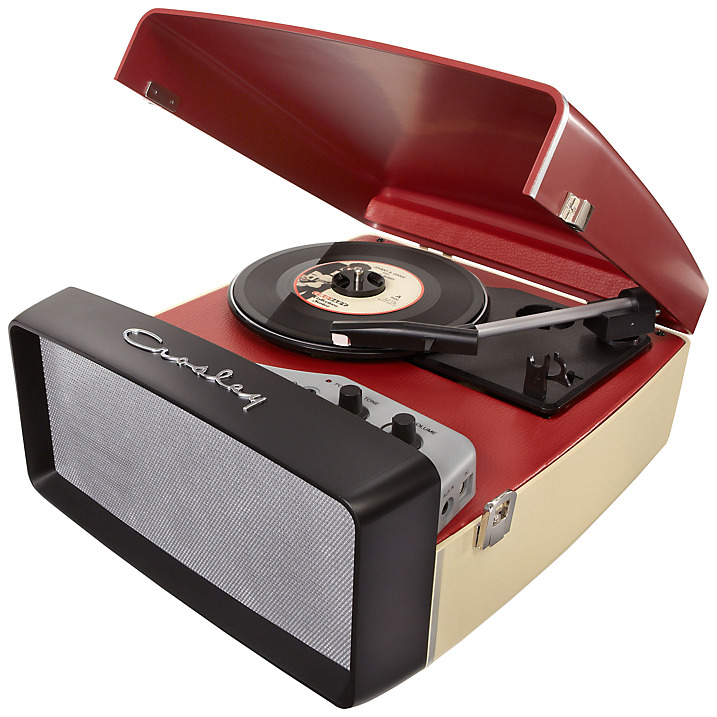 4. Crosley Collegiate USB Turntable, Cream
Price: £99
Yet another vintage looking turntable, this one seemingly inspired by the Bakelite transistor radios of the 1950s. It’s available in two colours – this red and cream model will set you back £99, but if you want the blue and white version it’s £119.95. Featuring a three-speed turntable (33, 45 and 78RPM), the Collegiate has a belt driven turntable mechanism and diamond stylus needle. There’s also a built-in leather handle which allows you to play your favourite vinyl records anywhere you go. What’s more, the turntable features a headphone jack so your 7 inch, 10 inch and 12 inch records can be enjoyed without annoying the neighbours. You can also connect the USB enabled device to a Windows equipped PC or Mac and use the included software to preserve your records in a digital file format. 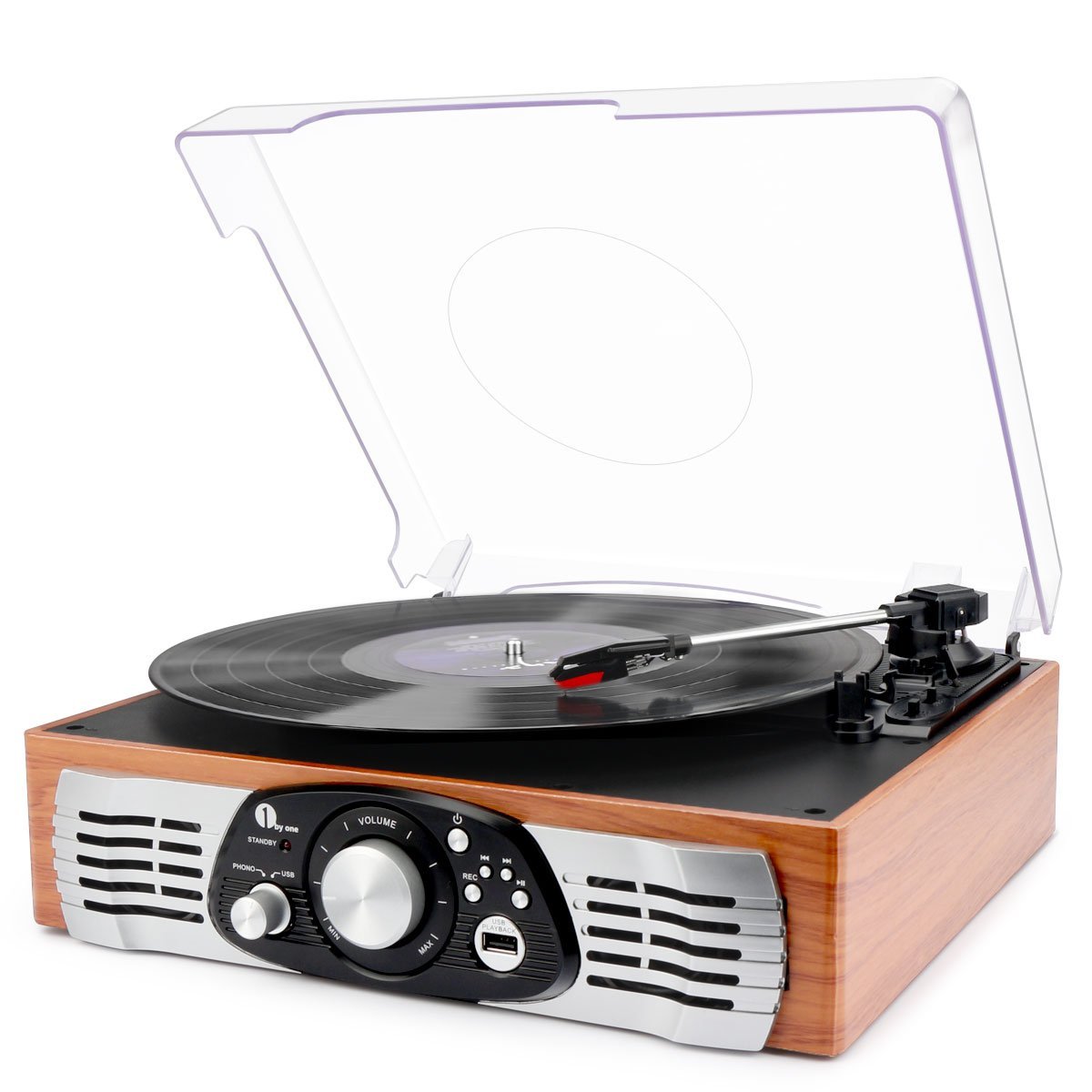 5. 1byone Belt-Drive 3-Speed Stereo Turntable with Built in Speakers, Supports Vinyl to MP3 Recording, USB MP3 Playback, and RCA Output, Natural Wood
Price: £55.99
Another very affordable, retro looking record player. This one from 1byone is so reminiscent of 1950s Americana, you half expect to find it in one of those silver caravan diners. On board are stereo speakers and a USB slot for recording your vinyl into a digital format. It’s also capable of playing vinyl at three speeds including 33/45/78RPM while auto turn off means that that when the record finishes it automatically turns itself off (handy for recording to USB). At the rear you’ll find left and right aux output sockets – handy if you want to pair the record player to external speakers. That’s probably a good idea as sound from the two 1.5 Watts internal speakers can be a little tinny. However, for the price this is great little turntable and would make a lovely Xmas present.