Anastasia Emmanuel is a one-woman show. Small, slight and instantly familiar, she exudes the kind of positive energy which makes you immediately want to be friends with her – yet beyond the bonhomie is one very smart woman who is hugely passionate about technology and the role it can play in changing people’s lives. For at just 30 years old, after a career that has already taken in some innovative startups, she stands as European Director of Technology & Design for Indiegogo, the crowdfunding site which has grown to be one of the biggest in the world, and hosts as many as 10,000 campaigns at any one time.

Over coffee at London’s Ace Hotel we discussed why crowdfunding has become so popular among UK startups, why it is women who are at the forefront of many exciting new businesses and how sometimes the most unlikely startups can prove to be the most successful.

And if you are sitting on that multi-million pound start up idea, she has some really great advice for you too…

How did you end up being so immersed in startup culture? Were you always passionate about technology?

I totally fell into tech. I went to university and studied for a degree in American Studies – I know, not at all related to what I do now! After graduating, I didn’t know what I wanted to do, so I went travelling for a year. When I came back, I decided I wanted to get into presenting.

I fell in love with tech, with how fast-moving it was

I ended up doing tech presenting at NewsPepper (a video based startup) for a variety of clients, and after the founder moved to Silicon Valley, it was me and two other women running the show – three women taking on the world of online video! I was interviewing a lot of tech people and I just fell in love with it, with how fast-moving it was. They were so motivated to get out of bed in the morning and risk it all for an idea, and that felt inspiring.

I realised I really loved it, and wanted to stay in that industry. I co-founded my own start-up, Publicate, as well as doing a weekly chat show at Tech City News. After doing that for a couple of years I was recommended by someone for a role at Indiegogo. I had a glass of wine with the then VP of International and that was that, really – I’ve been there two years now!

What makes Indiegogo different from other crowdfunding sites?

Indiegogo has been open to everyone from the start. [The site launched in 2008.] What I always say to people is, Indiegogo is here to help you. We’re quite different to other platforms in that way – we really want to help people to succeed. We help campaigns prepare in advance, so that when they’re ready to press ‘go’ they’re as good as they can possibly be.

We also offer flexible funding, meaning you can take home whatever money gets donated, rather than having to reach a set target, like on Kickstarter (the ‘all or nothing’ approach). That’s less daunting for people, I think.

Indiegogo is strategic, too. We’re not just a platform for projects – we’re actually working with these companies. I have a 96% success rate with the companies I work with [meaning they successfully raised their target amount]. That’s because it’s my job to help them; it’s the Indiegogo structure.

We’re committed to creating sustainable businesses and linking people up, so we create partnerships with designers and manufacturers and PR companies – we really want the projects to work.

What do you love about crowdfunding? Is it really the case that Indiegogo has a very high percentage of female entrepreneurs?

It’s open to anyone and reaches to all corners of the world. If your idea is good, it shouldn’t matter where you’re from, and Indiegogo proves this – we have been global from day one, and have had over 400,000 campaigns from 224 countries. If enough people love it and you’ve prepared well, a campaign will succeed.

Crowdfunding has a democratic angle, much more so than the tech industry at large. For example, 47% of our successful campaigns are female-led, compared to just 15% of VC [venture capitalist] funded companies. That’s because teams and products speak for themselves in crowdfunding – it levels the playing field.

Consultancy is what makes us different. We’re open, we help people.

The crowdfunding customer base is also much more representative of the real world. The 60 million people who visit Indiegogo every day are going to look very different to the male-dominated tech industry.

Anyone can browse the site and choose to invest in their own small way – you don’t need to be wealthy and powerful. And the motivations people have for crowdfunding are totally varied, from paying to be an extra in a movie to wanting to own the latest innovative gadget.

What are some of the advantages of crowdfunding over, say, more traditional ways of raising money?

What’s nice about crowdfunding is that there is a risk attached – that the product might be imperfect – but people are willing to accept that. Crowdfunding isn’t like ordering a product off Amazon – but that’s precisely what makes it exciting, too.

It’s also worth remembering that crowdfunding isn’t just about raising capital – you can use it to test a price point and learn more about your customer base. Misfit Shine is a great example of how even if you already have lots of money, you can still utilise crowdfunding to find out what customers want.

Early momentum is the most important phase

What advice would you give to anyone thinking about crowdfunding or launching a new product? What are the most common issues you encounter with crowdfunding?

Prepare! Research similar campaigns and products, gauge interest, spread the word, and perfect your marketing message before you launch. All the best campaigns have a really tight promotional schedule and know exactly what they’re doing from day to day. Crowdfunding success stories are no accident – they’re spending so much behind the scenes that people don’t see.

I’d also say to avoid launching a product at a big tech conference. There are too many other products flying around at the same time, and any media coverage will be swallowed up by the rest. It’s worth taking note of seasonality, too – don’t launch around Thanksgiving, or in the middle of summer, or very close to Christmas.

With mass consumer-type products, I tend to recommend they run the campaign in dollars. Asian markets are more familiar with dollars, and obviously the US is the biggest target market.

I have mixed feelings about ‘girls in tech’ meet-ups

Often the hardest thing in crowdfunding is actually fulfilling the rewards you promised, which is why so many fall short of estimated delivery times. If there’s a much larger response than anticipated, and suddenly you’ve got to manufacture and ship thousands of units, that can lead to problems.

People have lost faith in crowdfunding in the past few years – we do a lot of work to improve trust in the platform, which is why it’s so important to be honest. I say be transparent from the start – tell people where you’re at, how you’re going to use their money, why you are asking for investment.

As long as campaigners are totally open with their supporters, generally 90% of people don’t mind waiting an extra few months if something doesn’t go quite according to plan.

Do you have any favourite crowdfunding projects?

I’m rarely seen without my Misfit Shine (although I’m not wearing it today!) – that was such a cool product. I also loved GravityLight.

I also loved FlowHive – it’s this amazing product which allows beekeepers to collect honey on tap without having to disturb the bees and wear tonnes of gear. That one was one of 20 or so of our tech campaigns in the past nine months which have raised over $1 million!

What do you love about your job?

Because I’m in charge of just tech now, and I love how many cool things I get to see and help bring to fruition – I can be working on as many as 30-40 campaigns per month. Tech is a really large part of Indiegogo now; it’s one of our major categories along with ‘Film’ and ‘Cause’.

My advice to other women? Say ‘yes’

A lot of my work is done pre-launch, which is really important to a successful campaign. I give campaigners ‘homework’ and help them. A lot of my role is just hand-holding – the Indiegogo tools are there for people to use, so I try to help people access them in the best way.

I also love the fact that I’m often wrong. Take Axent Wear – now that’s a success story I wouldn’t have predicted, but it raised over $3.4 million!

What’s your experience of gender- and race-related issues in the tech world?

Gender is more of an issue than race when it comes to tech. I’m often on stage or on panels with all other men at tech and hardware events, and I have felt at times like I’ve had to prove something first before I get the respect of a certain audience – but I find it enjoyable to see people switch when they realise I know what I’m talking about, and I’m passionate. We’re lucky in tech, in a way, because it’s innately forward-thinking and innovative.

My experience has been that if you know your product and you know what you’re talking about, people don’t care what gender you are. Form is just as important as function for me.

I have mixed feelings about ‘girls in tech’ meet-ups – men need to be in the conversation. You need men, you need women. The best companies I know have a mixture of both. Indiegogo itself is 47% women, it’s female-founded, and the VP of Hardware and VP of Communications are both female. 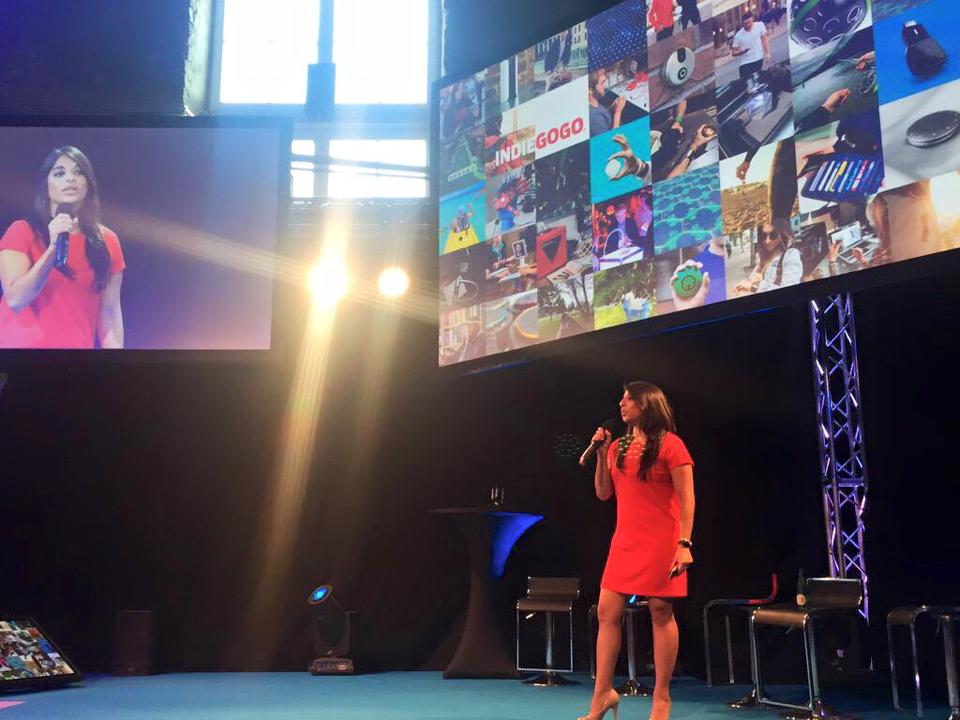 To me, I try to see the gender imbalance as a positive thing. People always remember me, and a large part of that is because I’m a woman in a male-dominated industry. I get more opportunities and invitations to speak – not that this is good, but you have to use the platform you’re given. And because I’m sometimes the only woman there, I’m memorable.

I feel very lucky to have that platform. It’s so empowering when other women come up to me and say how much I inspire them.

I think two areas where women would really benefit in the tech industry are in improved structural education around public speaking and in negotiation – women shy away from asking for a promotion or a pay rise. But your male counterpart will ask if you don’t, so as Sheryl Sandberg says, lean in.

Do you have any advice for women in the industry?

My advice to other women? Say ‘YES’. [This is a sentiment that’s been echoed in part by Julia Groves, Director of renewable energy and social investment crowdfunding platform, the Trillion Fund.]

Take opportunities when they’re offered to you – whether that’s a presentation, speaking in a board room, at a conference, a panel discussion – I say yes to so many things that if I had thought about them for five minutes, I’d have said no. But you have to push yourself to do it.

Don’t get bogged down in the fact that you’re a woman. Just be great at what you do, and no one will care.