Mum, Dad, if you’re reading this – none of this is about you.

There was a time that a weekly phone call with your parents and the odd holiday postcard were enough to keep your relationship ticking over, and them reassured that you were alive, well and eating your vegetables.

Then after that there was a time when, in addition to the weekly phone call, they would hover like a guilt-making spectre in your Facebook friend requests – just a torrent of hilarious e-cards, inappropriate liking and wall posts ending ‘Love, Mum’ to be held back like the Hoover Dam by the strength of your willpower alone. 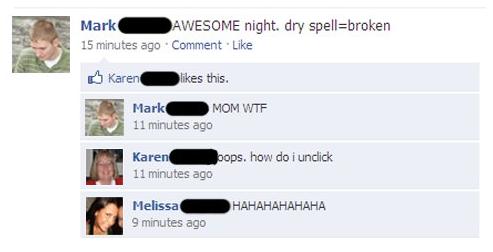 But both of those times have passed. Now, we’re living in an era where your parents have just as much right to a social media presence as you do – or in the case of Facebook, maybe more. And while they build up their own followings, join in all the hashtag games and cheerfully reconnect with your year eight boyfriend who was always ‘such a nice boy’, you’re left wondering how to redefine your adult parent/child relationship for the always-on age.

What do you let them see? How much should you interact? Do you subject her to the same stringent criteria as all your other digital pals, or should you like all of her Instagrams and retweet all of her tweets, just because she’s your mum?

If we can nail the rules for our generation, just think how much easier things will be for our future kids in whatever crazy-ass virtual world they’re doing their networking on.

With a few helpful pointers from the internet’s most shudder-inducing parental social media fails, here are some rules to live by. Go on, give your mum the best Mother’s Day present there is – engagement*! 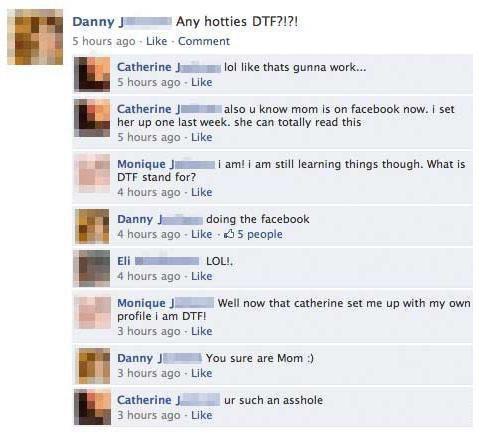 *No. The other kind of engagement.

1. Stick to your guns

When your parents start following your on Twitter (or worse, stealthily reading all your tweets without actually opening an account), you’re going to have to make a judgement call immediately – and stick to it.

Option one, the bravest, is to carry on as you were – sex jokes, expletives, Tinder anecdotes and all – and your parents just have to deal with the fact they raised a now-adult who both knows the F word and has cause to use it. If this window into your life becomes too mucky for their liking, they can’t clean it but they can quietly decide to mute or unfollow. It’s their call.

Option two is to scale it back, tone it down and risk losing followers with each mum-appropriate offering. You’ll be a shadow of your wisecracking former self, but at least you won’t have to panic-edit your feed before job interviews.

Then there’s the third option: to start a whole new account for your NSFM content and live a confusing double life, carefully updating both accounts in perfect tandem until either Twitter dies or you do. 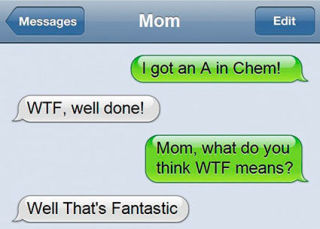 2. Don’t let each other forget that email and telephones exist

Having parents who embrace social media can be infinitely useful. Particularly for making them feel included in your life, or for when you forget to fill them in on things like illnesses, important memes or the fact you might have quit your job on a whim to spend more time developing your tattoo blog.

But it can also make both parties much lazier. You stop phoning them as often because you assume they’re fine from all the times they’ve tweeted about The Archers, and they’re so excited to be able to send you hilarious cat videos that they forget to tell you when your Great Aunt Hilda dies.

Try to to keep up some ‘real’ contact in the form of a phone call, like the olden days. Or at least send them a nice newsy email now and again. 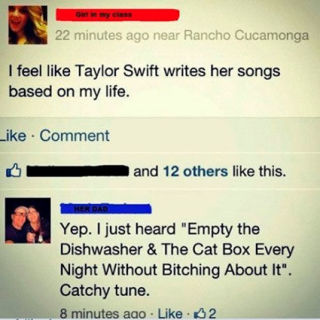 3. And they still have to listen to your anecdotes

‘I know, I saw it on Instagram’ is the ‘I know, you told me this story already’ of the modern age. It burns.

For the sake of good grace and not cutting somebody down in their stride, let’s all agree it’s good manners to just hear the story again from the horse’s mouth – and that’s as true if the horse is your own offspring as if they’re that guy from your office whose anecdotes always start ‘this one time, at Walkabout…’ 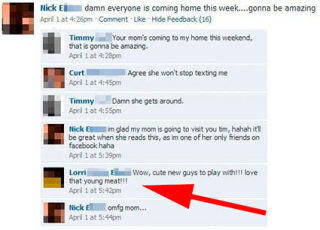 4. Don’t be precious about your friends and followers

Just as you revert to acting like a 15-year-old every time you go home for the weekend, encountering your parents in the digital realm can make you want to start slamming doors and yelling, ‘DON’T TALK TO MY FRIENDS YOU’RE SO EMBARRASSING GODDDD’.

But resist this urge. While it might be excruciating to watch while your Dad responds three days late to one of your friend’s Twitter gags, don’t stunt their enthusiasm – they have to make their own mistakes and learn from them, just like you did back in the beginning.

Plus, there is always the possibility that your friends and might actually enjoy interacting with your family. After all, they’re great people. 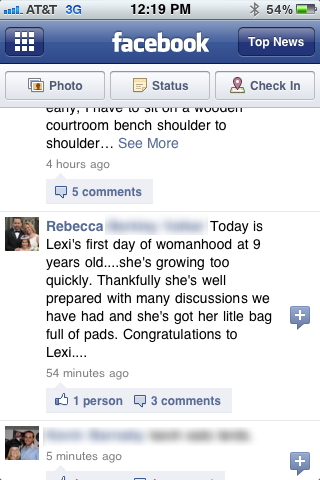 You didn’t appreciate it when they mocked your purple hair and Punkyfish flares back in 2002, so take the high road and don’t critique their social media skills unless they expressly ask for help. Sure, you might not appreciate their Buzzfeed quiz results as much as Margaret Next-Door-But-One appears to, but you’re not their target audience anyway.

It works both ways though, and you’re fully within your rights to remind said parent that correcting your grammar and pointing out the flaws in your Twitter argument is the social media equivalent of taking a spitty hanky to your face at the school gates. If the issue persists, phone them and  ask them to stop in a polite, mature fashion. 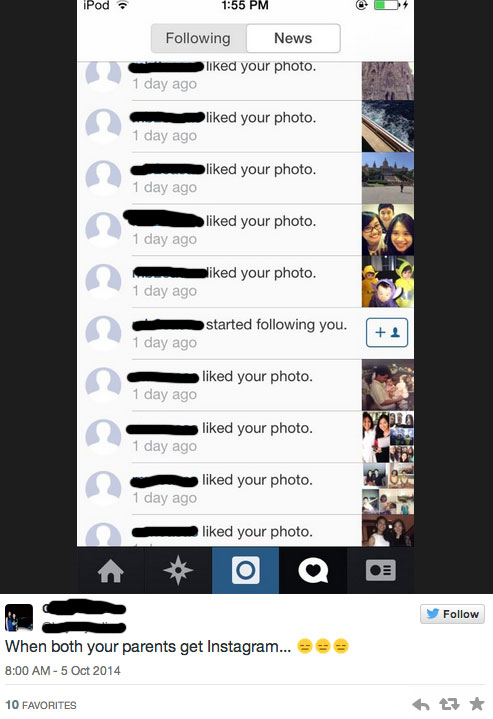 Of course they feel compelled to like every photo ever taken of you. You’re adorable, and besides, that face is (literally or metaphorically) half theirs. But if you’re struggling to stay on top of a tidal wave of notifications as they plough through every single photo you’ve appeared in since 2007, a gentle, ‘hey Mum, don’t feel you have to like everything I do – I know you’re really busy’ could be in order. 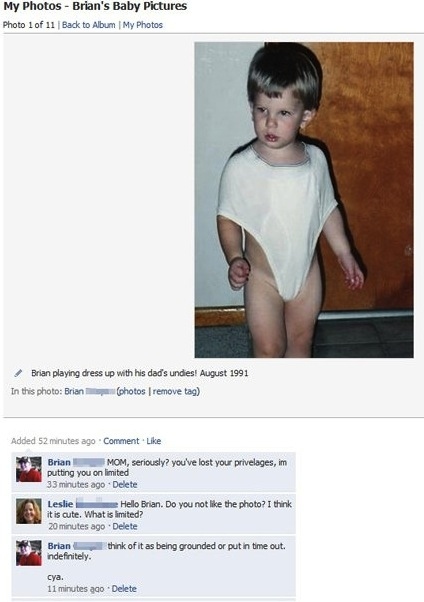 Did you ask permission before sharing that photo of them with perms and Tom Selleck moustaches in 1987?