Facebook is weathering the social media storm, but are we talking about a different generation now?

I reached a personal milestone over Christmas. After many years of waiting, putting it off and making lame excuses, I finally accepted my father’s Facebook friend request.

It barely matters these days, I rationalised, as I don’t do anything scandalous on Facebook anymore. I can’t remember the last time I was tagged in a drunk photo or had a banterous friend hijack my status (mainly because I got rid of all banterous friends in the Great Banter Cull of 2011). I can’t think of a single thing that’s happened to me on Facebook in the past year that my dad would bat an eyelid at. I swear more on Twitter, I share more on Instagram, I save glimpses into the darker recesses of my soul for WhatsApp or Snapchat.

In fact if anything it makes sense to invite my dad in, because Facebook serves as the digital equivalent of the kitchen table – for talking about things I’ve done, ranting about things I’ve seen and gossiping about who from school has had a baby or a really bad haircut. That’s basically it. Like a LinkedIn page for one’s personal life, or the evolution of those round robin letters people used to send at Christmas in the 90s.

We’ve been waiting ages for Facebook’s star to wane. Ages. Since my age group reached Peak Facebook somewhere around the end of the last decade, every year has felt like the year that it all had to end. Like MySpace and Bebo before it, I assumed the day would come when we’d find we’d just stopped caring enough to even log in. We’d eventually remove it from our favourites bar, delete the app to make room for an iOS update, abandon our profile pictures to stay young forever in the digital attic… and before long, chuckle over it in a nostalgic listicle. Providing listicles haven’t died too.

But while it might feel as though the platform is losing its footing, the figures say otherwise. A study by the Pew Research Center, published last week, showed that while Facebook’s growth has slowed, engagement has actually increased. And it isn’t our mates suddenly rediscovering a passion for Farmville – it’s our parents. But then, you knew that.

For the first time ever, more than half of internet users over 65 use Facebook (56%). While Instagram, LinkedIn, Pinterest and even Twitter all continue to grow at a rate that threatens to overtake Facebook, their engagement levels have barely budged since last year. Facebook, on the other hand, is 7% busier every day than it was in 2013. What we don’t know is how much of that 7% is coming from the over-65s category, or how much is your auntie sharing her Buzzfeed quiz results – but we’d wager it’s a lot.

‘Facebook is something we all got in middle school because it was cool, but now is seen as an awkward family dinner party we can’t really leave,’ says Andrew Watts, 19, in his treatise A Teenager’s View on Social Media. ‘It’s weird and can even be annoying to have Facebook at times. That being said, if you don’t have Facebook, that’s even more weird and annoying.’ And there lies the trap. Pew sums it up as a ‘home base’, the vest-and-pants foundation of our social media usage. Not exciting, not sexy, but practical and necessary.

My brother Dan, also 19, agrees that his peers use Facebook for functionality, not fun. ‘It’s actually become much more factual and informative in recent years, filled with links to articles and people’s opinions on current affairs – which we’ve been getting from Twitter for ages anyway. Most people my age use it because they’re afraid of missing out, while our parents and older relatives are actually enjoying it.’

And he’s right – it’s not stats but enthusiasm that seems to mark the biggest difference between Gen Y and Gen-everybody else. Take a look around your newsfeed and the chances are the most fervent usage is coming from the over-40s. They’re the ones bothering to comment on your photos, the ones posting paragraph-long statuses and the ones peppering every real-world conversation with ‘I know you did, I saw it on Facebook.’ 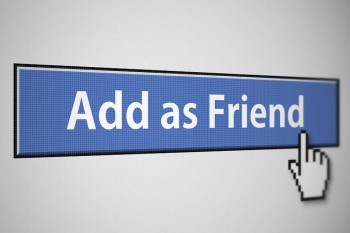 Pose the question ‘Is Facebook now used most enthusiastically by the over-40s?’ on Twitter and you get unanimous agreement – but then of course you do, it’s Twitter. ‘Facebook is by FAR our most popular platform, readers love it,’ says Miranda Thompson, senior writer and social media manager at Woman’s Weekly, which has a 45+ readership. ‘My mother (aged 54) uses it much more than I do and is more active in sharing articles and photos,’ agrees Holly Turrell.

‘It’s for mums,’ confirms Lauren Geisler, speaking straight to the heart of the matter. Give it a few more years and you can almost imagine them implementing the tagline ‘Facebook: the family network’ under photos of beaming barefoot parents hugging their sticky-faced offspring. There’s a reason I’ve not posted much on Facebook of late, and it’s mainly to do with how little I’ve been using my womb.

Of course it might be that, as writer Holly Bourne believes, ‘They’re going through the honeymoon period of constant oversharing five years later than the rest of us.’ In which case in another few years they’ll be as jaded and cynical as everybody else, sick to the back teeth of boastful updates about Mrs Next Door’s new conservatory and Brian from work’s hernia op.

But if Zuckerberg and his crew focus their energies on retaining this older age group, perhaps they’ll keep them active for longer too. After all, it’s easier than collecting email addresses and more intuitive than texting. Pew’s findings show that we’re increasingly juggling more than one network rather than leap-frogging between them, with 52% of online American adults using two or more social media services compared to 42% in 2013, so it’s possible Facebook will become less of a novelty for any age group, and instead settle in as the backbone of our organisational arsenal.

Like a Filofax, or a paper address book – which come to think of it, at least for now, my parents still use too.