Sitting in the limousine that Devialet provided journalists to persuade them to listen to yet another sound system, I asked the representative a question. “If your product is sold out almost everywhere,” I queried, a can of Fanta Limón in my pampered hand, “why do you want us to write about it? People can’t buy it.”

“We don’t need people to buy it,” he replied. “We just want them to know it exists.”

This set the tone for our meeting with Devialet, a Paris-based company whose name sounds like a French tourist enquiring after the Driver and Vehicle Licensing Agency. As the world’s most-awarded audio startup, the company are understandably fiercely proud and slightly defensive about their achievements – you get the impression that they think their beautiful product is too good for human ears. Mine certainly were impressed by the loud, bassy, so-strong-you-can-feel-it audio issuing from the palpitating Phantom at the back of the car, but I probably would have been equally impressed by any high-end system. Devialet are experts in the technicalities of high-fidelity sound, and I, sadly, am not.

Nonetheless, there’s no denying the Phantom is a very desirable piece of kit. Designed to compete with sound systems in the £10,000 – £30,000 range, it won Best Product awards from Rolling Stone, Wired and USA today at the Consumer Electronics Show. Not bad for a company barely known outside France.

Listening to Devialet talk about their product is like listening to a pharma expert describe their cure for cancer. There’s an enormous amount of excitement and pride, coupled with frustration that laymen don’t understand why it’s so impressive. The UPnP audio streaming protocol, Devialet’s rep explained, can only do 10 operations per second. Devialet’s new protocol can do a million per second. They spent 3 years working on it. Even I can tell that it’s something pretty special, but the fact remains that only a very select group of customers would understand or care.

So how do you make them care? By playing every type of music you can think of, and letting them hear the result of a decade of collaboration with engineers and scientists. Because this speaker creates truly beautiful noise. You feel the bass in your chest, the highs soar, the lows throb and there’s not a whisper of distortion. Dance music sounds like you’re in the centre of the floor at a pulsating club in Ibiza. Live rock includes every twang of the strings and jagged drawn breath of the singer. And classical – I could have been sitting in the orchestra pit. In fact, Devialet are working with a range of musical ensembles to ensure flawless reproduction of their work. Personally, I think they’ve nailed it already.

As Phantom plays music, the membrane at its side visibly beats. This is something Devialet refer to as Heart Bass Implosion, designed to “reproduce the exact acoustic pressure recorded by the microphone” to give “a physical impact.” That impact is palpable, and if we’re honest, the beating speaker looks very cool, too. Which doesn’t hurt when you’re spending over a grand.

There are two versions of Phantom, the 750W white one at £1390, and the silver 3000W edition at about £1690. Harrod’s has the only remaining stock in the world, and there’s a two-month waiting list. If the price seems a little low for a product that was 10 years in the making and embodies close to 100 patents, that’s because Devialet felt that there was a ‘psychological limit’ of $2000 for speakers, and worked hard to ensure their product fell within that range. It’s certainly a beautiful thing to spend your bonus cheque on.

That beauty (think R2D2 as designed by Apple) is dictated almost entirely by function: no designers worked on Phantom. The only part of the speaker they were able to control the appearance of, Devialet explained, was the logo on the front. It’s designed to look like a pattern certain sound waves would draw if you placed the speaker in a tray of sand. Everything else: the round shape, the 6-litre size, the 12KG weight, the resin and plastic materials, the Kevlar-like insulation inside – was determined by the desired sound quality. Or, in the case of the insulation, to save the components from exploding given the 174dB pressure inside the speaker: about the same as you’d find in a rocket. 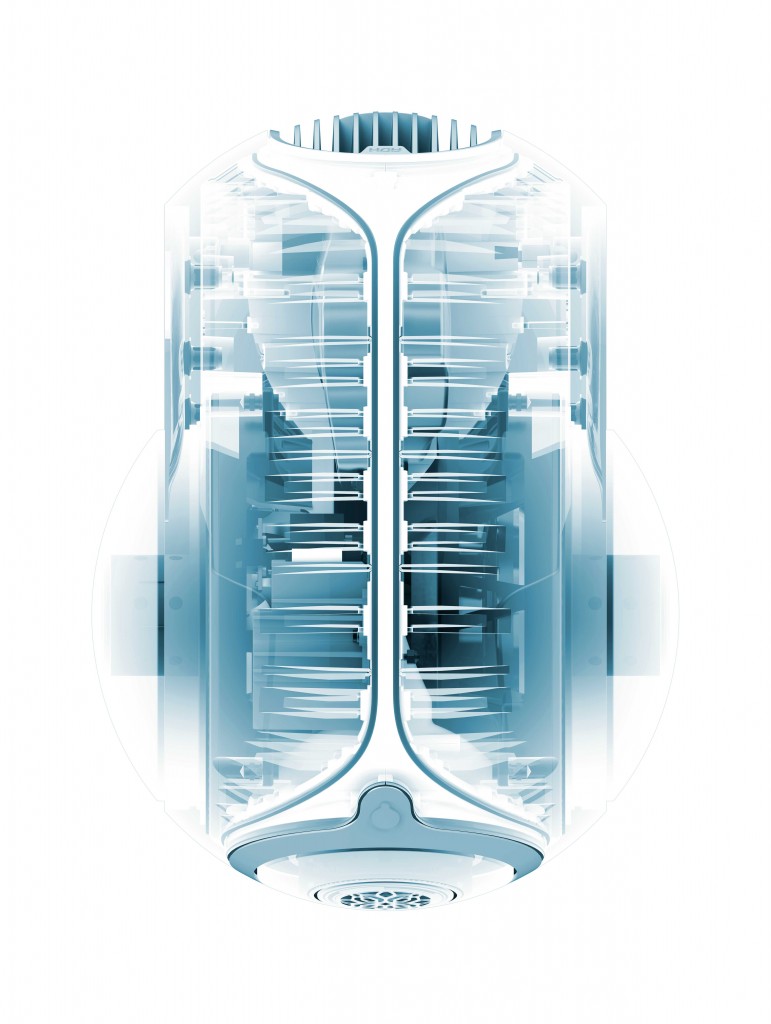 The insanity doesn’t end there. Phantom has its own router, called DIALOG: a hub that creates its own WiFi connection to the speaker. Devialet were quick to explain that while most people think that physical wires offer the best audio quality, they believe WiFi is far superior. However, to avoid the problem of poor signal/speed/quality, they had to make their own router to ensure the streaming sound is up to the calibre of the speaker. Bluetooth, they said with just a hint of a sneer, would never pass muster.

The speaker also has its own app. Called SPARK, it allows you to link up to 24 (!) Phantoms throughout your house, and decide individually what they all play. Want Barry White in the bedroom and The Beatles in the bathroom? No problem. Tchaikovsky upstairs and Beethoven in the basement? Job done. Taylor Swift throughout? No blank spaces anywhere.

The app also comes with a virtual playlisting feature called Playground, which lets people add songs through iTunes and Deezer, but not Spotify yet. The app runs on Android, iOS and Windows – an enquiry about BlackBerry got the usual derisive laugh, but I’d argue that executives buying a £1400 speaker might well have a BB in their pockets.

All told, the Phantom is a beautiful and impressive piece of audio equipment that deserves to have done as well as it has. It speaks volumes (no pun intended) that even without the enthusiastic Devialet rep present, the system has sold out almost everywhere. For a previously-unknown company, that’s impressive: it’s basically the OnePlus One of the high-end audio world.

I may not be an audiophile, and I may not have £1400 to spend on one speaker, but I’ll definitely be listening out for more from Devialet. Limo or no limo.