Sony’s big press conference at CES 2015 kicked off on a bit of a low note: the recent hack that exposed painfully private details about salaries, passwords and the inner workings of a media behemoth. Sony President and CEO Kazuo Hirai managed to get in some boasts about The Interview’s incredibly high viewing rates, though, to which one audience member was heard to mutter “we don’t care!”.

Moving swiftly on, Sony regaled the crowd of 2,000 journalists, including us, with the stats for PS4 sales: 4.1m units sold in the Christmas period alone, and more than 18.5m overall. Nothing new there, except for the mainstream launch of the PlayStation Vue media platform that’s been in beta testing for the last couple of months. It’s an internet TV platform for viewing live broadcast and catch-up content directly on your PlayStation, designed to challenge traditional TV packages.

Next up, Sony covered its new ‘world first’ 5-axis image stabilisation technology, debuting on the Alpha 7 II camera. It’s designed to help you capture images and video with just your hands, eliminating the need for a tripod. Sony also announced it’ll offer a total of 64 different lenses by next spring.

The big draw, though, was TVs – keeping with the popular theme of 4K for this year’s CES. As with several other tech brands at CES (notably LG and Samsung), Sony tried to claim credit for the adoption and development of 4K ultra-HD TV, talking about the company’s focus on the three Cs: contrast, clarity and colour.

The flagship TV in Sony’s 4K lineup is the X900 C Series, which is (in places) thinner than the Sony Xperia Z3 smartphone. That’s impressive. Sony commented that it “appears to merge with the wall”, with the bezel “virtually disappearing”. 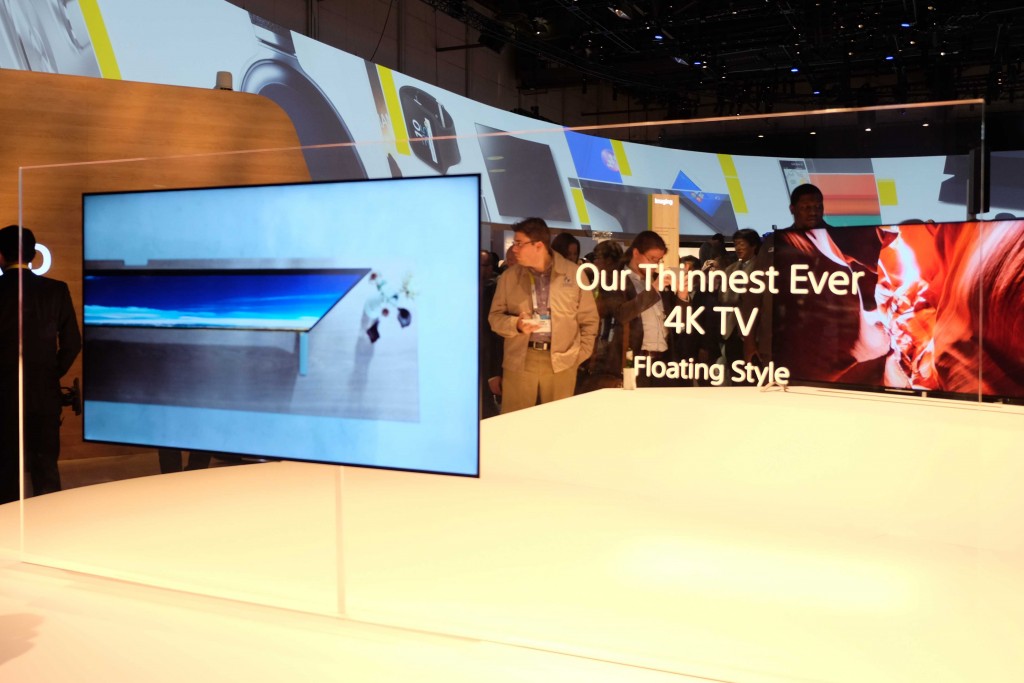 As you can see, the top portion is incredibly thin – the transparent panel is holding the TV, so what you’re looking at is that very thin black line in front of it! 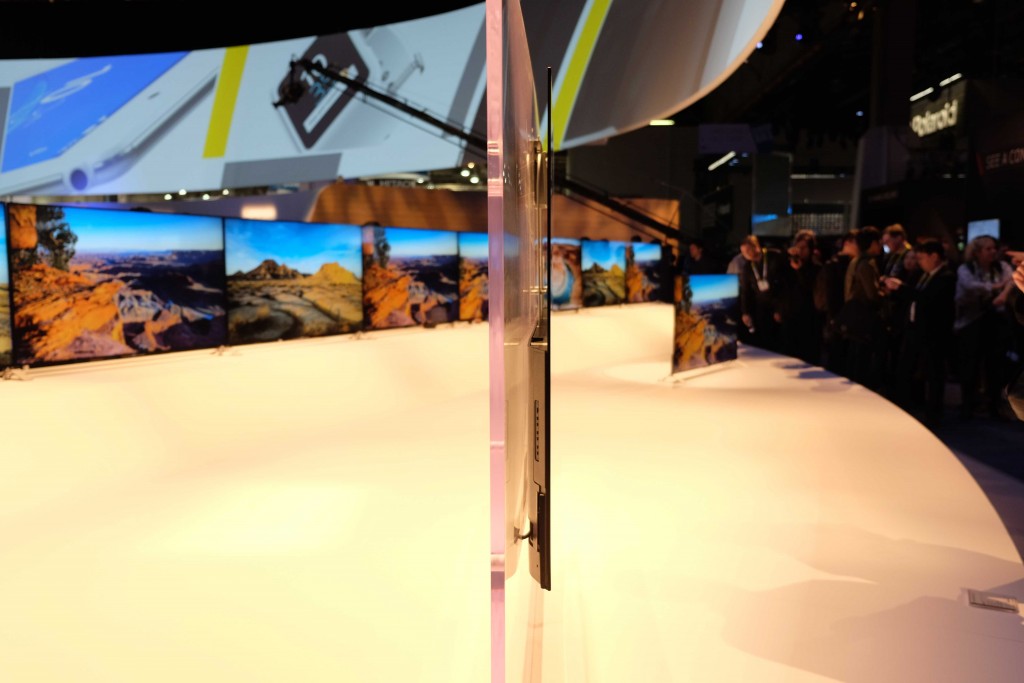 The X900 C Series, and Sony’s other 4K TVs, use the new X1 4K processor, which claims to deliver incredible performance on each of those three Cs. This sounds a lot like what we’ve heard from all the other TV brands at CES if we’re honest, and to make matters worse, Sony then brought out Netflix’s Chief Streaming and Partnerships Officer, Greg Peters, who delivered almost exactly the same speech he made earlier in the day for LG. In short, Netflix is excited to work with Sony (and LG…) to give consumers a top-end streaming experience, including high dynamic range (HDR) TV. This answers our earlier question of whether other manufacturers than LG will be included in the Netflix Recommended TV Programme.

Sony also announced that all its TVs released this year will run on the new Android TV platform, offering a “quick and easy UI” that has super-accurate voice search. It can translate 42 languages and apparently can’t be tricked by accents, though we’ve yet to try this with our famously bad Brummie impression. Android TV includes apps, games and content from the Google Play store directly on your TV, and you can ‘throw’ content from your Android phone to your TV set using Google Cast or even control the TV from your smartwatch. All pretty cool.

Commenting that they want “consumers to have the tools pros use”, Sony went on to announce some new 4K Handycam and Action Cam models, using none other than skating supremo Tony Hawk. We were treated to a video of Hawk strapping a Sony cam to his various boards and performing tricks, followed by the unexpected treat of Tony himself appearing on stage. Yes, it was cringy, but Tony talked about the intuitive interface of the GoPro-esque new Sony camera range, which apparently allows him to perform better tricks. The lineup includes a Handycam with optical image stabilisation that’s 3 times better than the previous model, and also 30% smaller, 20% lighter and a fair bit cheaper, offering “4k for $1k” as Sony put it. 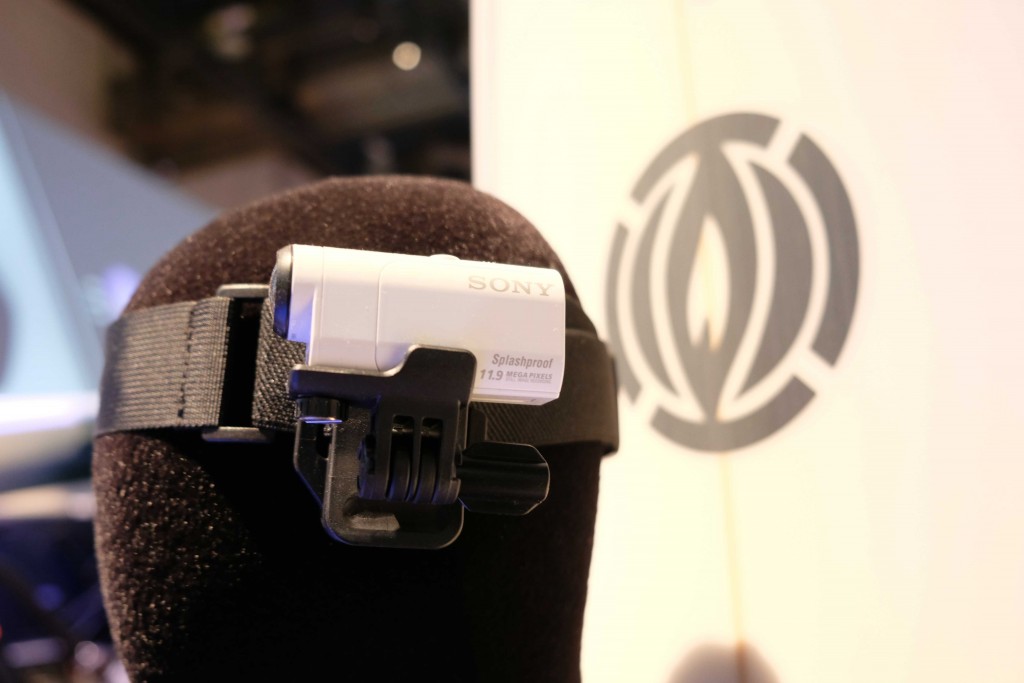 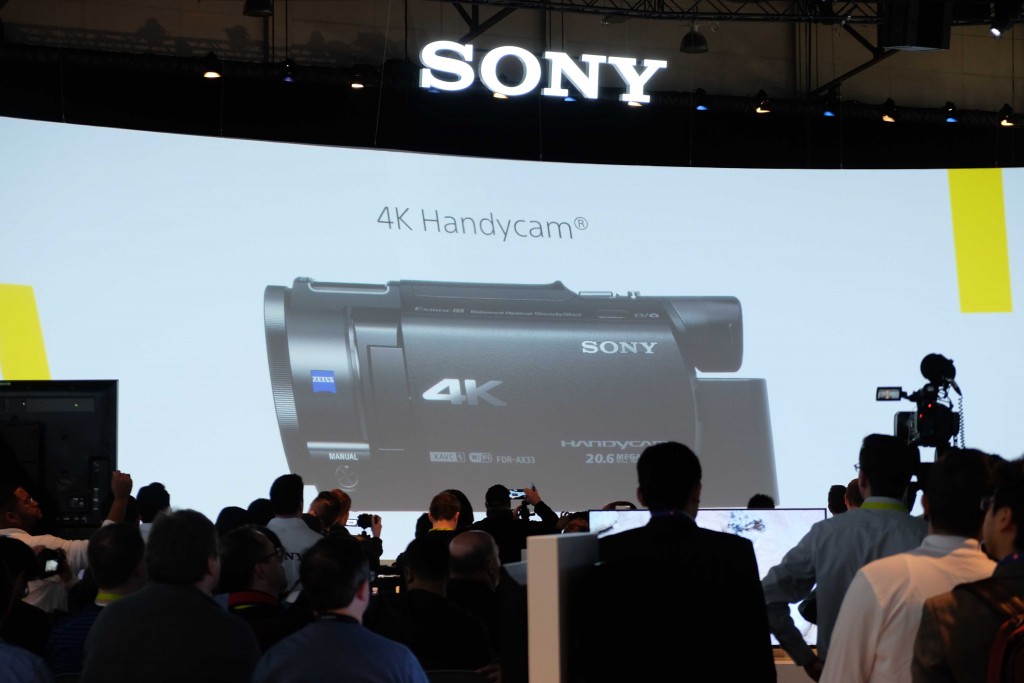 As well as gushing about the no-compromise visuals of the Handycam and Action Cam models, Tony announced a new console game on PS4 coming out this year, though he wasn’t able to tell us the name. Apparently it’ll have “Tony Hawk” in it, though…!

Finally, Sony mentioned that the Xperia Z3 smartphones can also record in 4K (which we knew) and will all be getting Android Lollipop globally within the next month. That’s pretty exciting if you’re an Xperia fan, which we definitely are – check out our Z3 Compact review here. 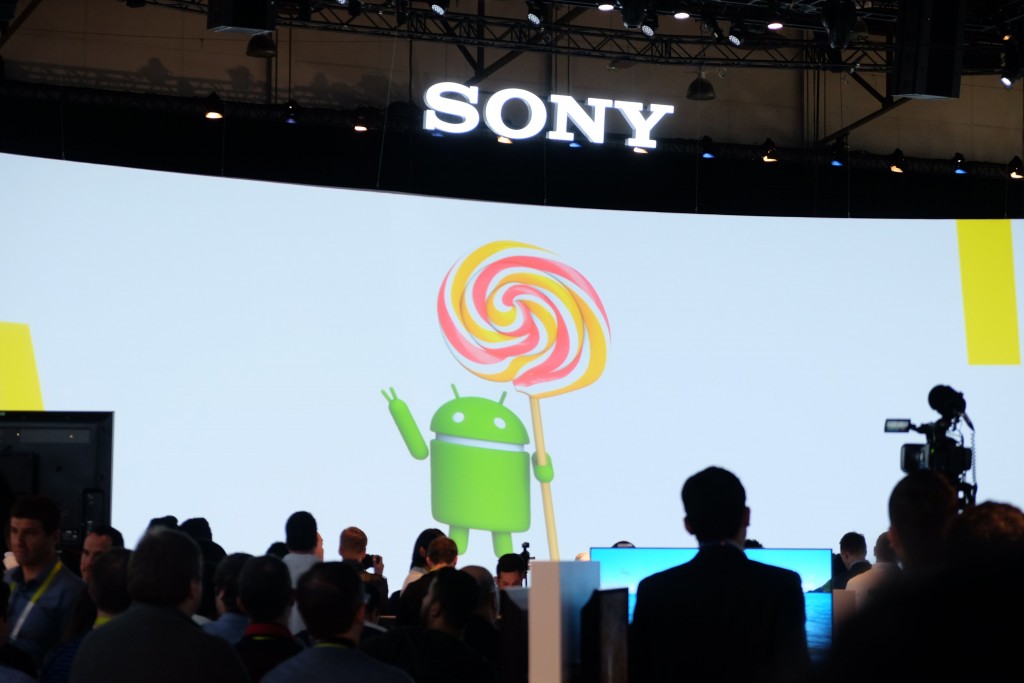