This weekend, a whole bunch of tech bloggers and me – Shiny Editor Holly – headed to Edinburgh with Acer to take up their liveblogging challenge (#acerliveblog2014).

With only a few hints of what was to come, we departed on the sleeper train from London, leaving at a bleary-eyed 11.50pm. Despite the time (and the fact that we had to be off the train at 7.30am), most of us headed to the lounge car and sat around comparing phones and generally being giant tech nerds. Going to bed at 2am seemed like a fine idea at the time, but when the train dude knocked on my door at 7 with a cup of tea, I was pretty sure he was trolling me and I’d only been in bed for 30 seconds. 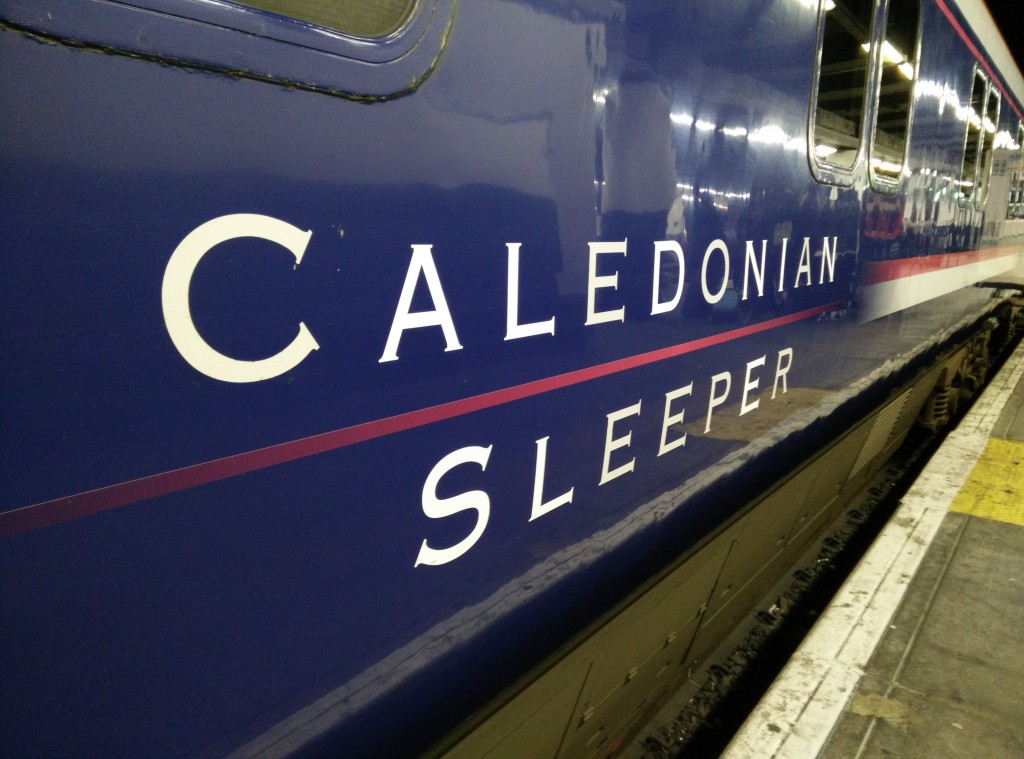 If you’re wondering what a sleeper train looks like (and lots of people asked on Twitter), the corridor makes you feel like you’re literally Marilyn Monroe in ‘Some Like It Hot’, while the rooms have bunk beds! Yesss. Obviously I awarded myself top bunk, since I had a room to myself. 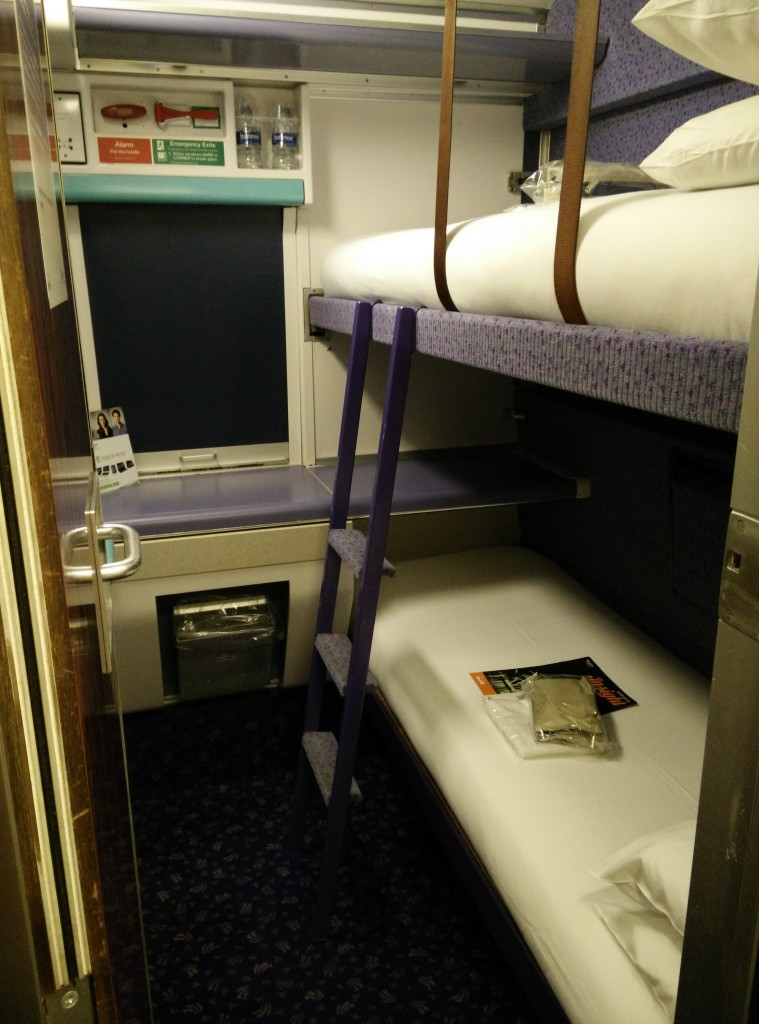 I’ve slept on every train I’ve ever been on, so nodding off was no trouble for me. Sadly there were no power points in my room, so I didn’t get to switch on any of the things in the backpack of tech that they gave each of us for the weekend: 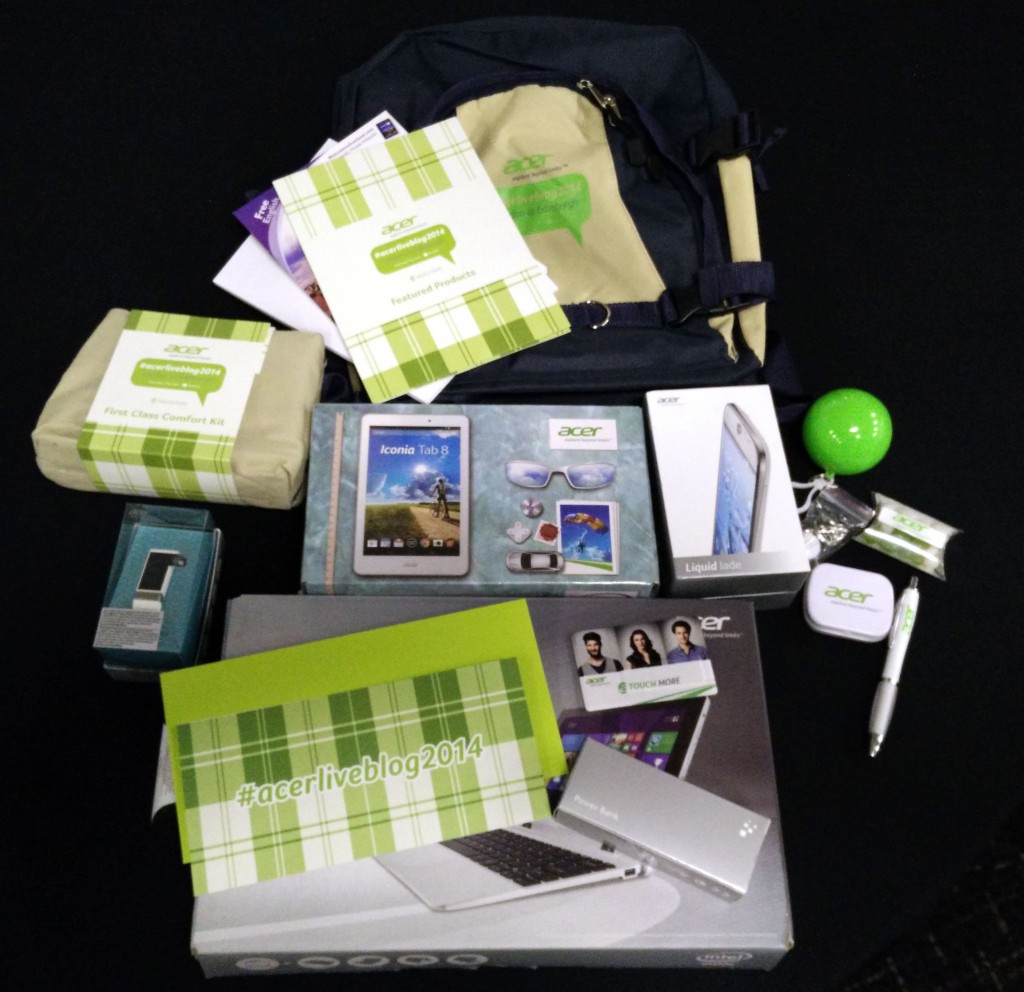 The main bits are an Iconia 8 tablet, Switch 10 laptop, Liquid Jade phone and Liquid Leap fitness wristband. Although the Hulk-green poncho and Acer-branded sweets were much appreciated too.

On Saturday morning, Acer put us in teams and gave us a list of challenges: 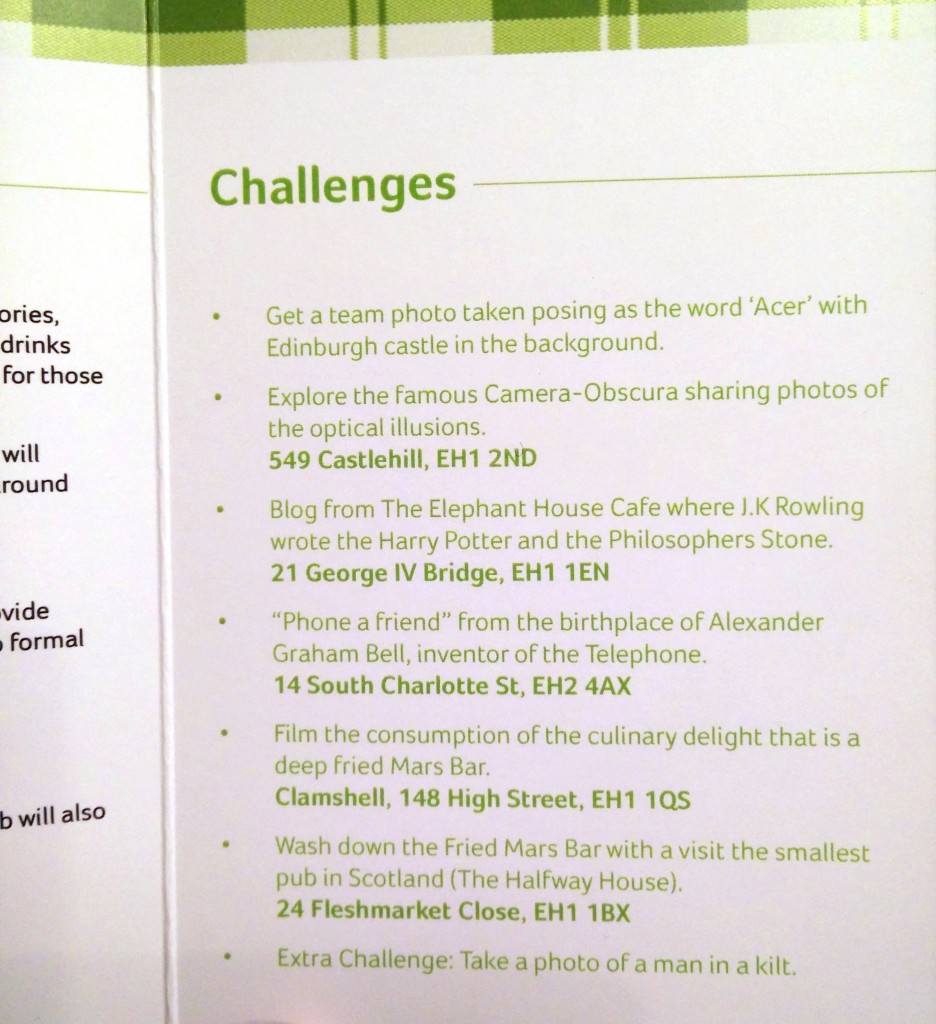 Which you can see me completing in my liveblog video below, including footage of me eating a deep-fried Mars bar. I’ve also done some mini hands-on reviews of the gadgets, and a lot of looking sleepy. We didn’t have any equipment with us (no tripod!) and the videos are taken on my phone, so apologies for wobble.

I didn’t have a huge amount of time with the Acer tech, but here are my first impressions after 24 hours of use. 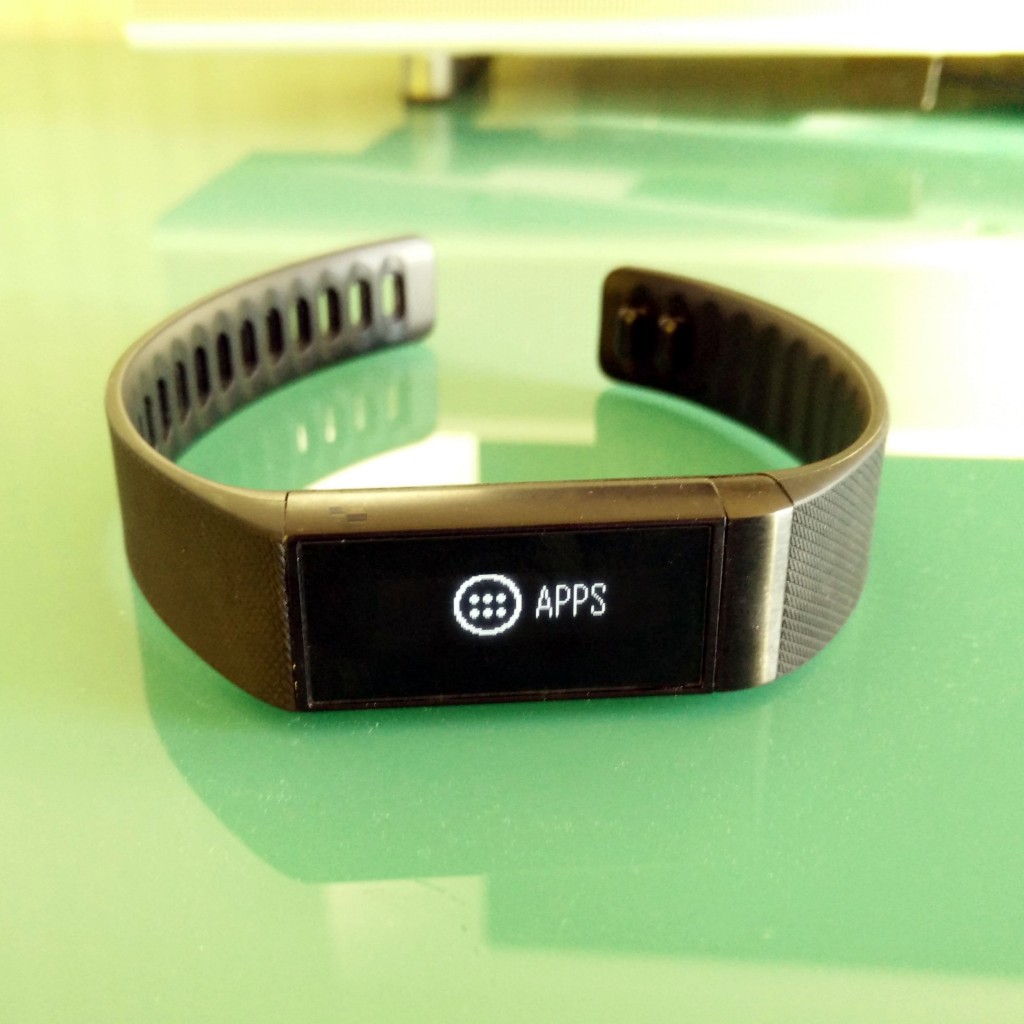 What it is: a new fitness wristband with touchscreen and app. Price: £79 from Acer.

What I thought: Despite following the instructions, my first two Liquid Leaps bricked. I don’t mean they switched off, I mean they actually died and couldn’t be revived. If this happened to something I’d paid £80 for, I’d be pretty annoyed – never mind twice! It’s possible it was just teething problems as it’s a new device and an unusual situation, but I don’t think I’d have done anything differently at home.

Once I had a working wristband (with thanks to the Acer team for their immense patience), I actually found it pretty useful. It counts your steps, tells you calories burned, gives you mobile notifications and lets you know how long you’ve been on the move. The screen is fairly hard to activate, though: as you can see in the video, you have to tap it hard, and sometimes the scrolling just doesn’t work. Also, it’s really, really hard to put on. All things considered, I’d pay the extra £20 and get a Fitbit Flex. 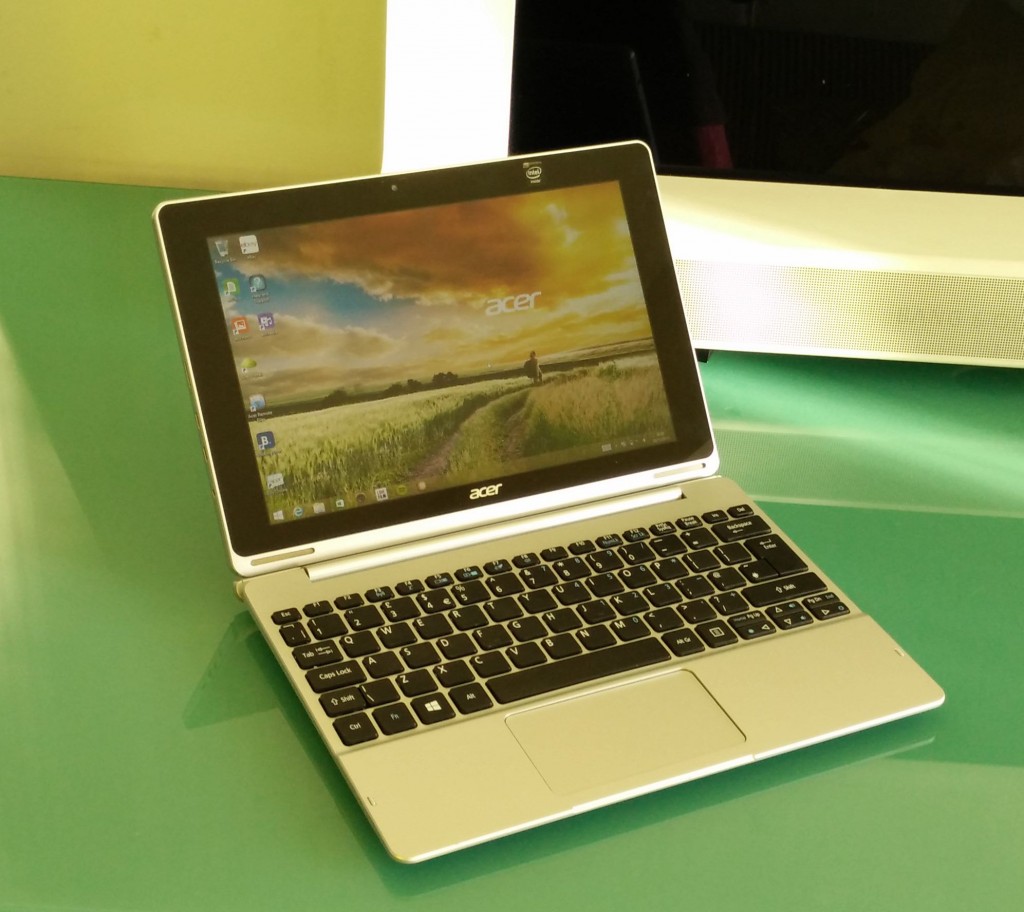 What it is: A convertible laptop (tablet and keyboard with magnetic hinge) with a 10.1-inch screen. Price: £279 from Very.

What I thought: This was my favourite of the bunch. It’s a great size for travelling (almost fits in my handbag) and only weighs just over a kilogram, making it extra portable. It feels robustly made and has Gorilla Glass 3 on the screen, so you don’t have to worry too much about babying it. The magnetic hinge between the tablet screen and keyboard comes apart really easily (you can see in the video that I can do it one-handed) and you can rearrange it to be an A-shaped stand (ideal for train tables), L-shaped presentation-style, or use it as a tablet.

The keyboard feels a bit cramped because of the size, but you get used to it quickly enough. It’s not going to work as a desktop replacement, because it wouldn’t be powerful enough (not to mention a serious lack of ports!), but for a travel laptop, I could definitely see myself using this. Great price, too.

What it is: A budget Android KitKat smartphone with a 5-inch HD screen, costing £229 from Acer (although cheaper elsewhere). 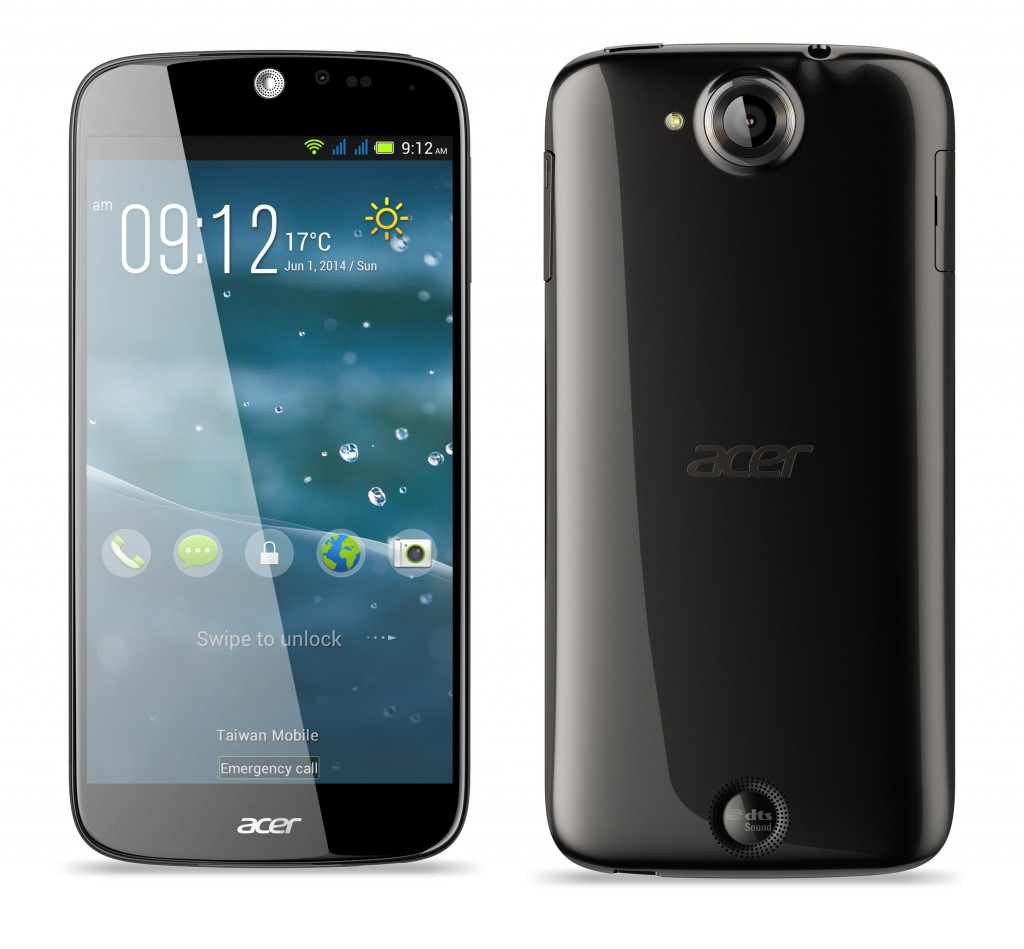 What I thought: This has tough competition in the form of the Moto G, but it’s still not half bad for the price. I haven’t had enough time with it to do a full review, but performance was good (it has a quad-core processor and 1GB of RAM) and it looks like it costs more than it does. The screen is HD (not full HD, but you can’t tell) and the curved back looks stylish. It’s also very, very light, to the point that some of the bloggers on the trip forgot which pocket it was in.

The main disappointment in the time I had it was the camera. I go into more detail in the video, but while the focus is fast and it offers 13MP, it often wouldn’t focus where I wanted, couldn’t deliver sharp enough photos and kept refocusing when I took video. On those grounds, I probably wouldn’t buy this, but if you’re not too fussed about photos then it’s worth a look.

What it is: An 8-inch Android tablet with curved metal iPad-style back and full HD screen. Price: £149.99 from Argos. 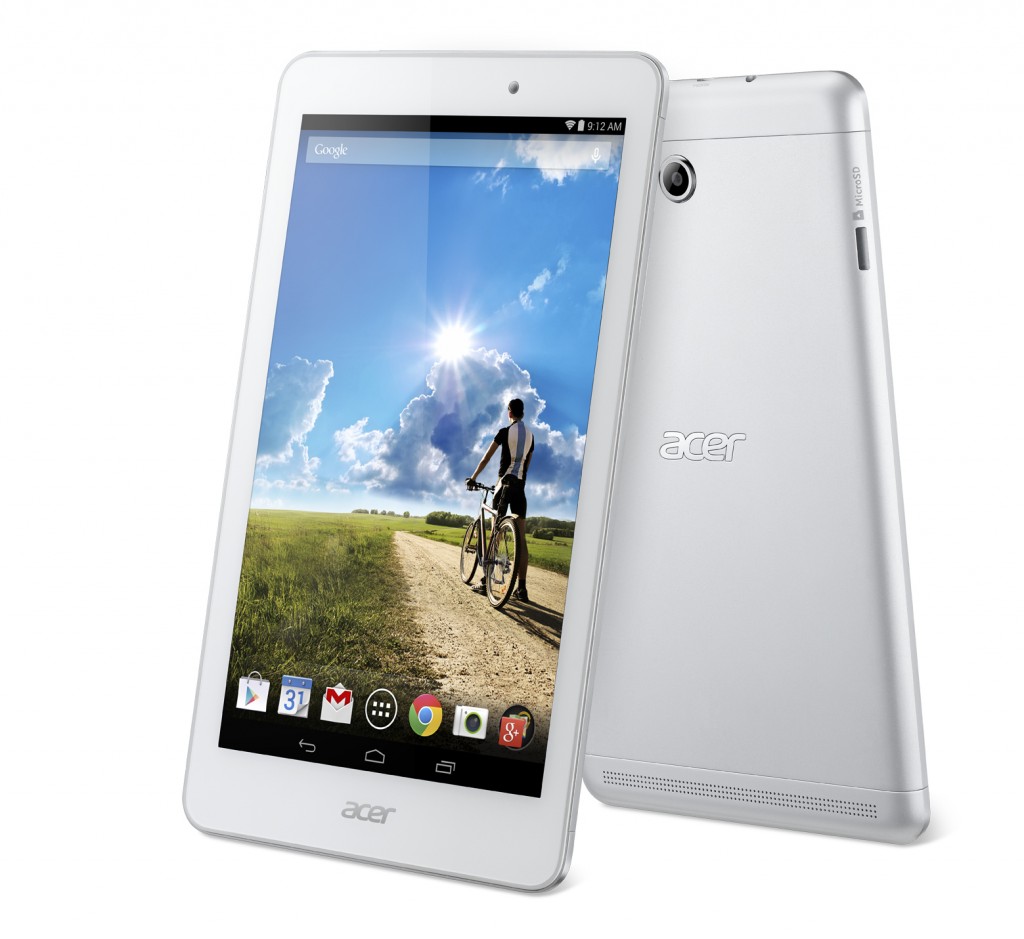 What I thought: Again, I haven’t had time to do much more than some light browsing and messing about with apps on this one, but first impressions are very good. The screen is bright and super clear (not surprising since it’s full HD), performance is snappy (quad-core processor, 2GB of RAM), and it feels very premium in your hand. It’s a little heavier than plastic-backed tablets because of that metal, though.

There’s a 2MP selfie camera and 5MP main as well, and it’s just about the perfect size for taking out. For the price, this is looking great.

While I wasn’t in love with all the tech, the Switch 10 and Iconia Tab 8 definitely look good to me, and using them out on the road was a pretty fun way to test performance.

Huge thanks to Acer and the rest of the bloggers for an amazing weekend – and now I’m going to get some sleep.