Zomato has been around for a pretty long time – 6 years, in fact –  as a restaurant discovery service. But there are lots of those, so it hasn’t really ignited our interest until now, other than making us vaguely wonder why you’d spell tomato with a Z.

But they’ve just launched a new version of the app with a raft of enhanced features, including helping hungry folks find an independent restaurant to munch at, and we decided to give it a go. Because goodness knows, we’ve been to Pizza Express enough times.*

*I will never have been to Pizza Express enough times.

On skeptically opening the app, expecting a service much like TopTable and the other squillions of restaurant finders, I was immediately impressed. Why? Because there’s a giant button for finding restaurants that do pancakes. I once spent a very sad Shrove Tuesday phoning round all the local restaurants to try and find one that would toss me up a lemon and sugar – to no avail. Clearly, this is an app after my own heart. 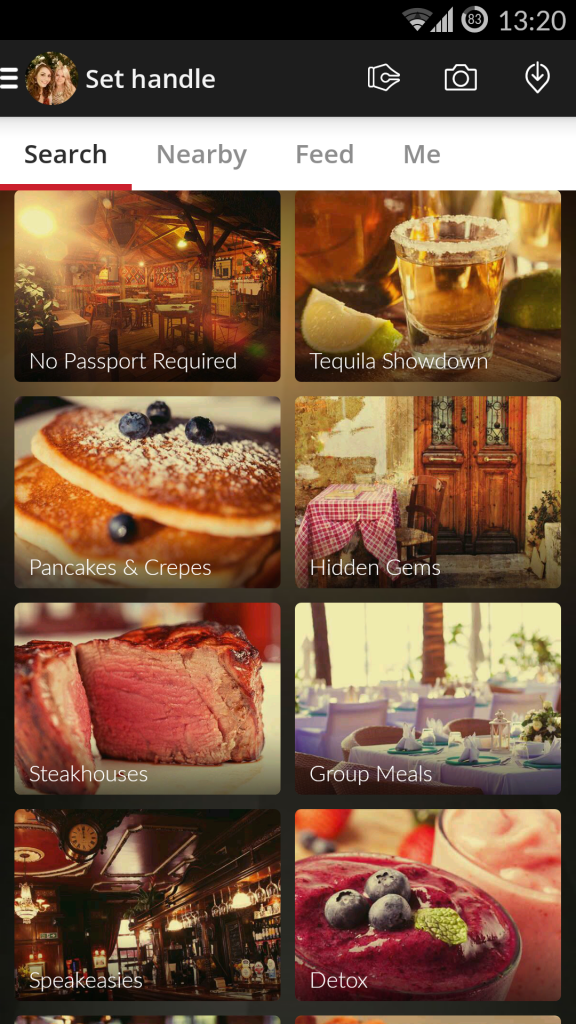 Other search options include speakeasies, popups, places with WiFi (know your audience!), places that are ‘trending’ (surprisingly, the controversial cereal café was not listed) and – new to this version – collections of restaurants for the time of day, week, year, and even the weather. So I got suggestions for Christmas and New Year places, and I’m guessing the pancake button gets even bigger in February.

Some of the ‘Collections’, as they’re called, are confusingly named, and there’s no description. For instance, ‘No passport required’ seems to mean restaurants that specialise in one country’s cuisine, but a lot of them served British food, so that doesn’t really work. Similarly, ‘Ain’t no sunshine’ presumably means indoor restaurants (aren’t most restaurants indoors?), but it’s really hard to tell. I think usability has been sacrificed a bit for snappy titles – I’d appreciate a clearer headline or a bit of description.

Flicking over to the Nearby tab, I had the option of either searching a text list of local eateries, or viewing results on a map. You can even draw a search area, like on an estate agent’s website – which would be handy if you didn’t want to cross the river, for instance.

I stuck to the text list and used the filters to narrow my selection. You can do a text search, specify only restaurants above a rating of 3.5 (there are no other options, just 3.5), places that are open now (this one’s likely to be hyper-useful in that rubbish period after the pubs close – London is nowhere near being a 24-hour city), and the ‘exclude chains’ feature that Zomato are especially proud of. 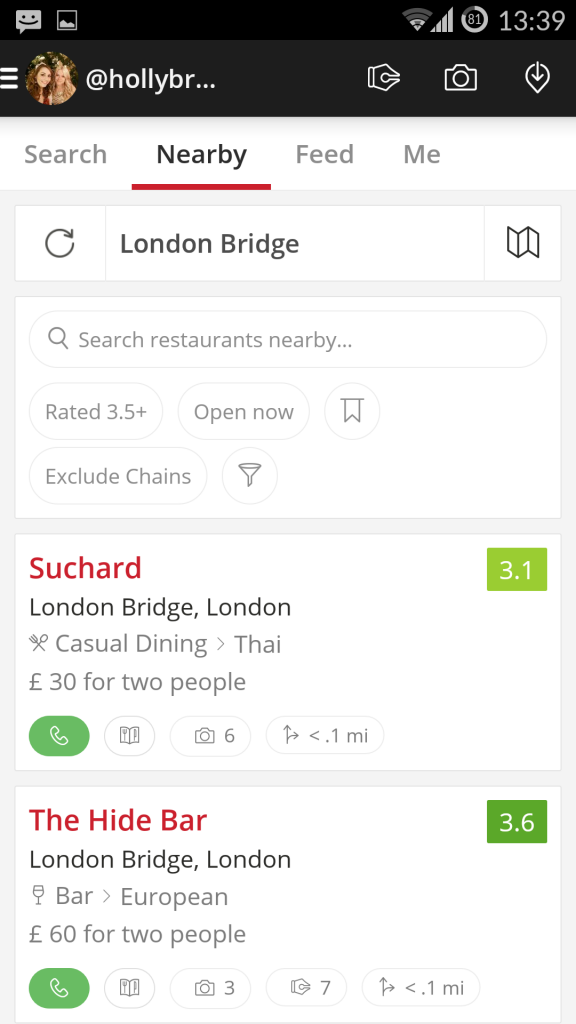 Tapping the funnel brought up a whole load more filters, including price, friendliness to veggies and halal, whether they take cards, if there’s a bar, even if they do afternoon tea. These are all very useful, but I wouldn’t have tapped the icon if I wasn’t doing a review – a little funnel is not remotely adequate to explain what that (incredibly useful!) button does. There’s SO much white space next to it, too – why doesn’t it just say ‘refine’? Bad UX, if you ask me.

By this point I was getting hungry, so I decided to use the app to find a place for Christmas lunch with my colleagues. I did a search of places near the office and got a wealth of results, including some cringingly expensive ones (Aqua Shard, anyone?), so I filtered for price and rating. This gave me quite a strange range of results, including Pret and some greasy spoons, so I changed my price bracket from £0-£20 to £20-£40 (this seems to be for two people, which is a tad confusing) and found Dim T. It’s a chain, yes, but it’s got an incredible view over Tower Bridge and I’d forgotten about it. The team was excited to go there, so I tapped Book and put in 6 people for lunch. No availability. Two people for lunch? No availability. Hmm. I called the restaurant and they booked us in for 6 at noon, suggesting the booking function of Zomato isn’t especially reliable.

Exploring the restaurant listing a little more, I found that the app not only has photos of the inside of the restaurant (and this goes for tiny independent places too), but also a complete scan of the food and drinks menus. Come on, that’s impressive. It makes you feel like you’ve already been to the place, which is absolutely priceless when you’re taking someone somewhere for the first time. 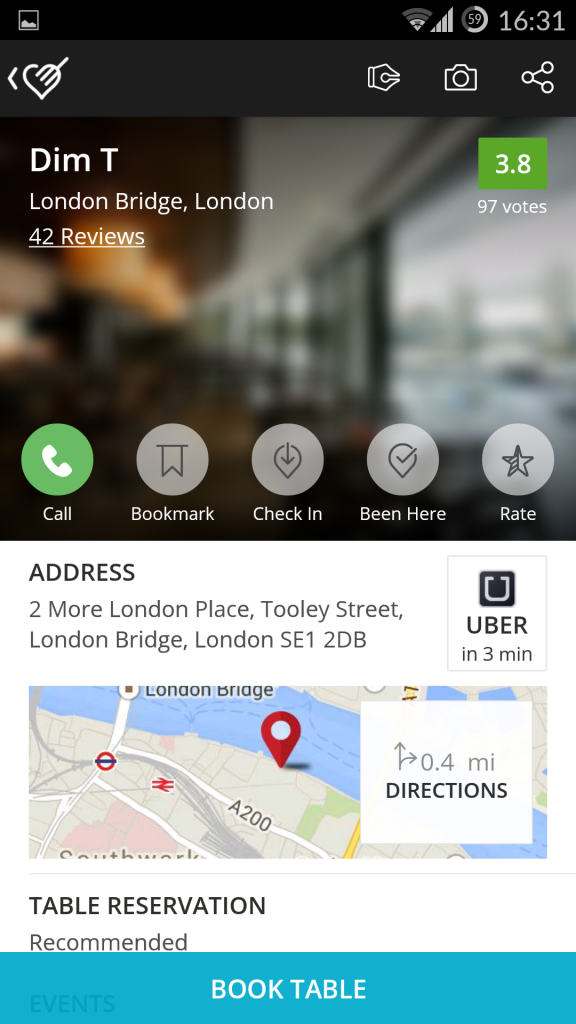 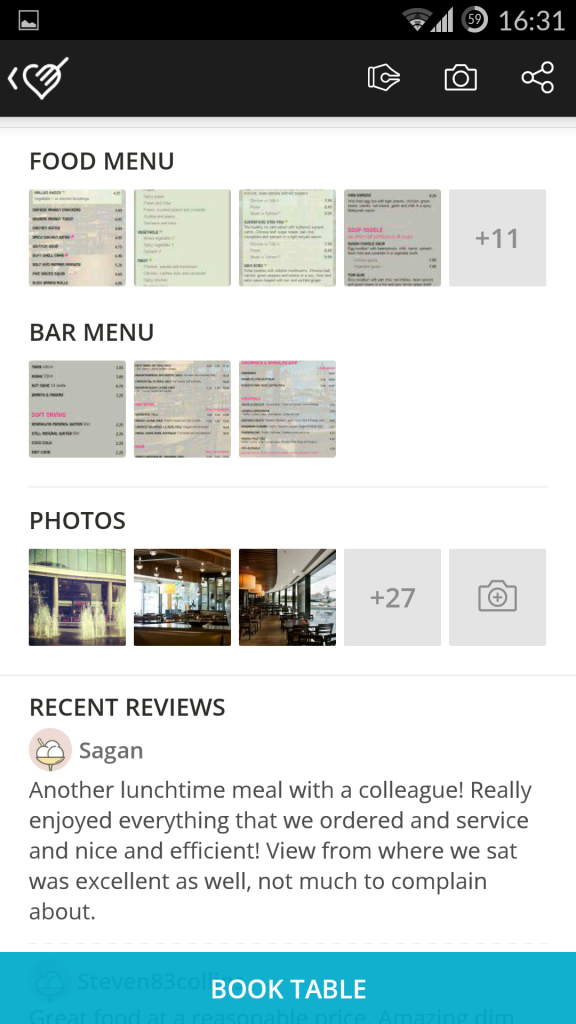 Below that is even more detail. User reviews, opening hours, approximate cost for dinner for two, whether they take cash or cards, how much a pint costs, whether they do takeaway, wifi, cocktails, home delivery… Maintaining a database like this on all the restaurants in London (plus Edinburgh, Glasgow, Manchester and Birmingham) is a mindblowingly huge task, and if all the information’s accurate, then I am seriously impressed. 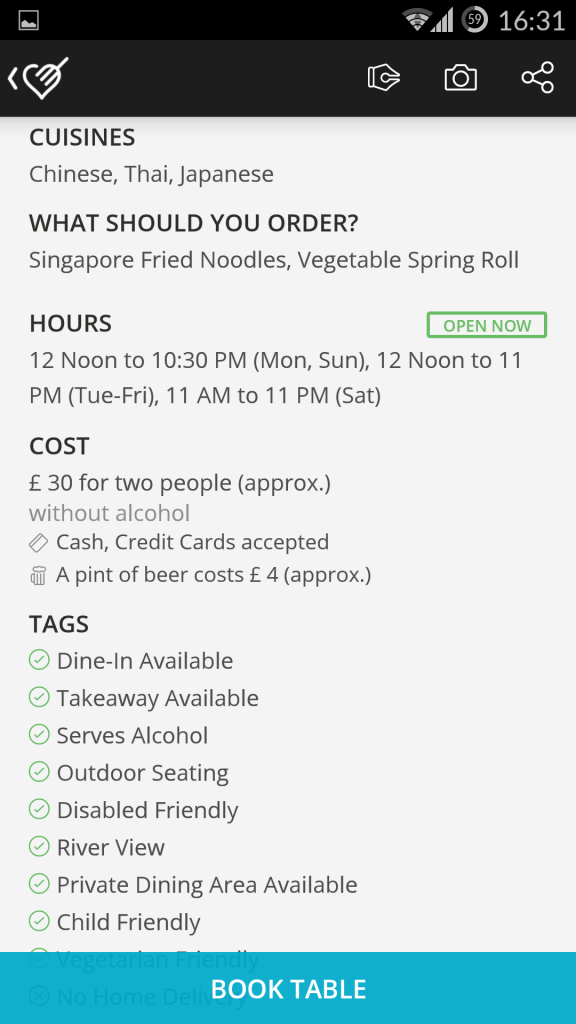 So – is it accurate? 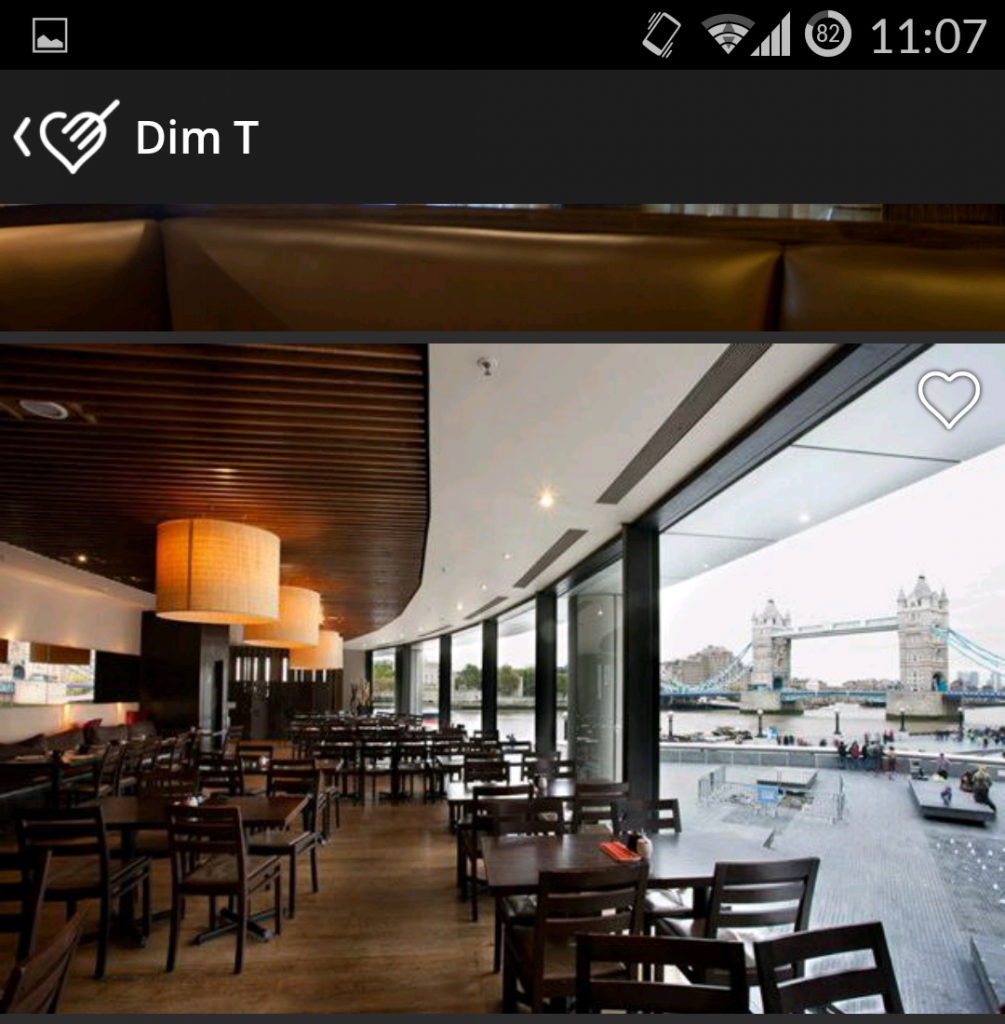 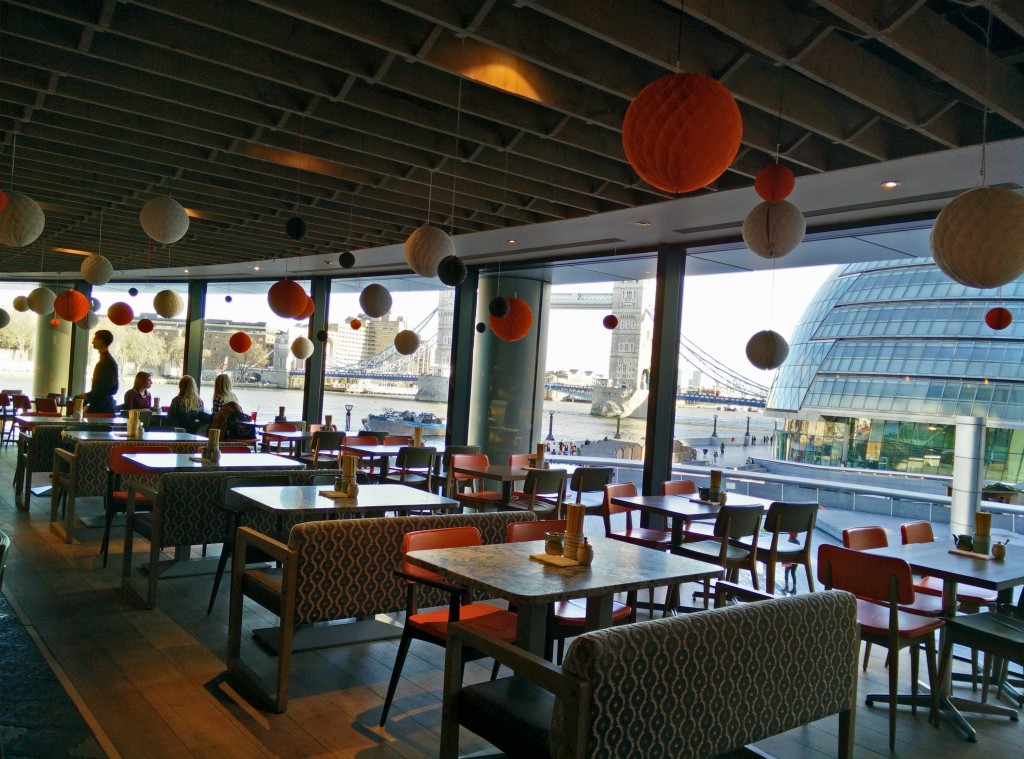 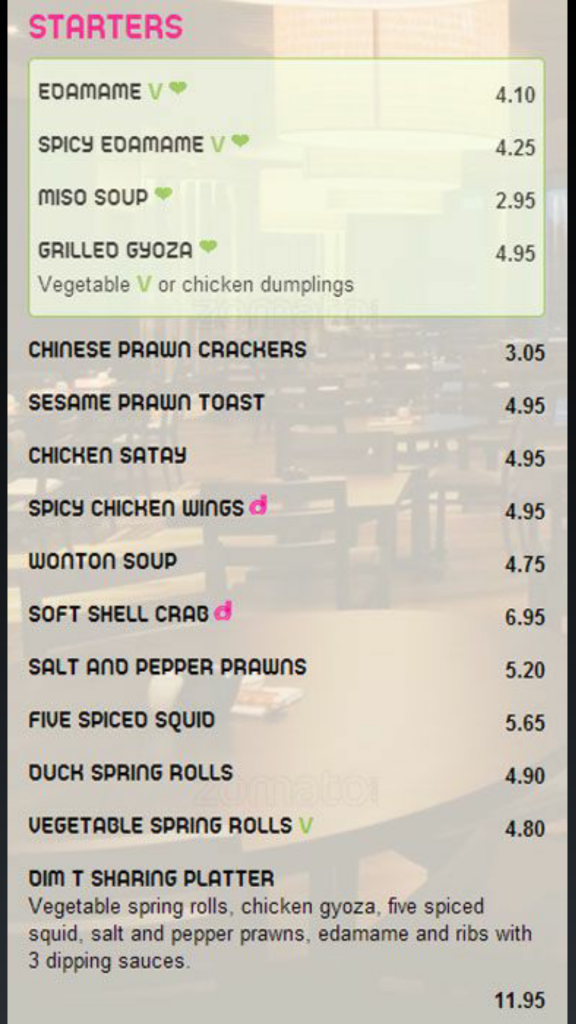 There are some slight variations, but it’s pretty similar. Easily enough to tell you whether there’s stuff on the menu you’ll like, and whether you’re OK with the prices.

Admittedly, I didn’t take advantage of the ‘no chains’ feature this time (although I tried it again the next night and went to a lovely independent bar), but I’m hugely impressed with Zomato. I didn’t think I needed a restaurant discovery app, but I’ve found myself using it quite a bit. Zomato makes it really easy to see all the places around you and exactly what they offer at a glance, without going to 20 different restaurants’ websites. And that pancake feature is priceless.

You can get the new version of Zomato free for Android and iOS. It’s also on Windows Phone and BlackBerry, but sadly without the new features.