My upstairs neighbour is a rhinocerous. This is the only conclusion I can come to, considering the noise he makes tramping around on his wooden floorboards every night. Given the total absence of any kind of soundproofing in rental flats, this has been keeping me awake every night  – and I’ve had it.

I’ve tried earplugs (don’t block all noise, often randomly ping out in the night, and need replacing every three), the White Noise app (sometimes works, depending on quality of phone speaker, but generally I can hear both that and the rhino), and headphones (just about strangled myself) to no avail. It was time for drastic action – Sleepphones.

These £70 Bluetooth headphones are designed for sleeping. They’re embedded in a fleece sweatband that goes ’round your head and makes you look like an extra from the ‘Let’s Get Physical’ video: 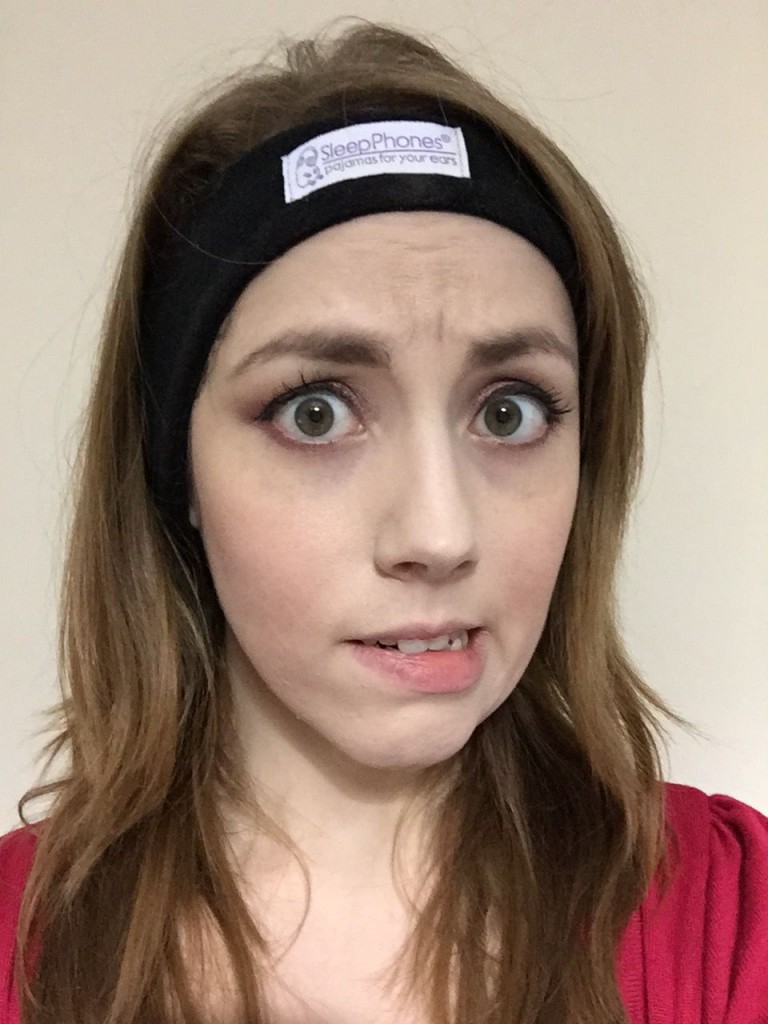 They do also come in a cheaper wired version, but given the trouble I had with normal headphones, I wasn’t willing to risk a self-throttling again. Here lies Holly Brockwell, strangled in her sleep while listening to a kickass Muse riff.

Sleepphones come in a baffling range of head sizes, which left me wondering exactly how large my noggin is. Luckily, they’re fairly stretchy and the Medium fitted just fine. There are grey and lavender versions too, but I didn’t hugely want to look like I run an OAP exercise class, so went for classic black. 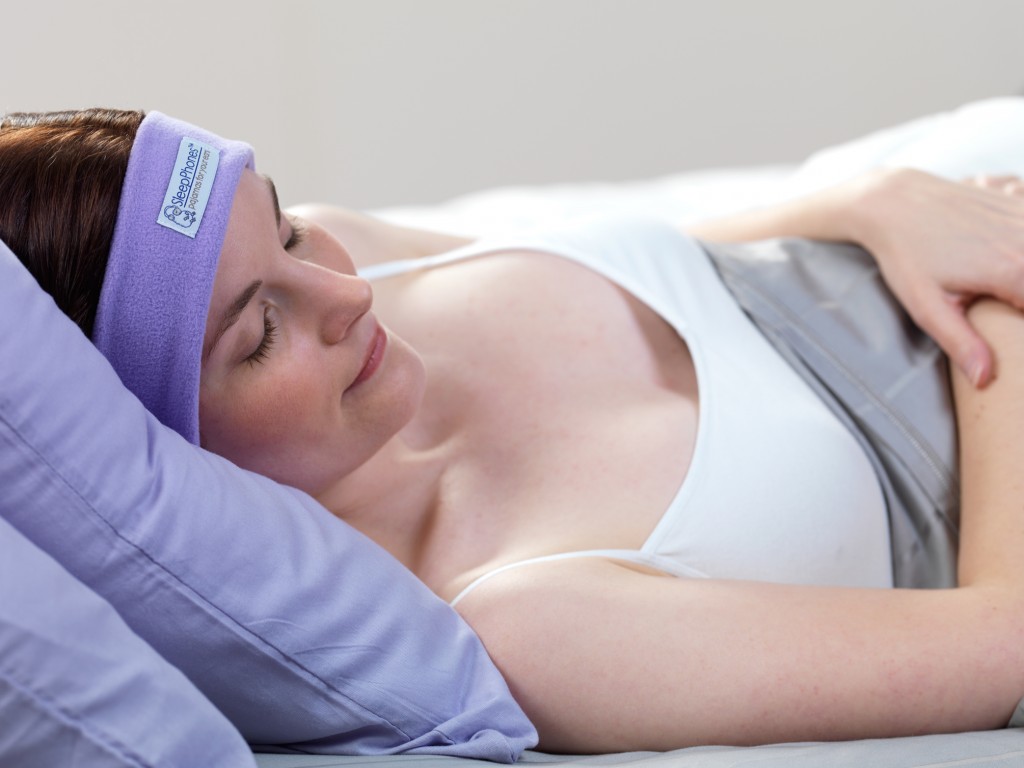 First things first – they need charging. This entails opening up the velcroed band, digging out a little plastic square and plugging in a micro-USB cable (the same kind you use to charge most phones). It takes a good few hours to reach full charge, but that lasts for 4-5 days, so not bad. I’ve got into a routine of plugging them in when I take the cable out of my phone in the morning, which works nicely.

Hold down the little button on the plastic square and the headphones will power on. After you’ve done this a few times, you’ll be able to locate it through the band, so you won’t have to keep opening it to turn them on. Then hold it down again to turn on Bluetooth, and pair up your phone in the usual way.

Annoyingly, pairing my phone didn’t mean I could just turn the headphones on and it’d connect. For some reason, I had to re-pair quite often. It only takes a few seconds, but I’m not sure why it’s necessary.

Once you’re happily paired up, an American voice confidently declares “PHONE ONE CONNECTED” and you can start playing sound. The headphones themselves are loose inside the fabric band, so can shift around – give them a little wiggle to get them exactly on your ears.

You’re supposed to wear the band across your forehead, like this (bouffant sold separately): 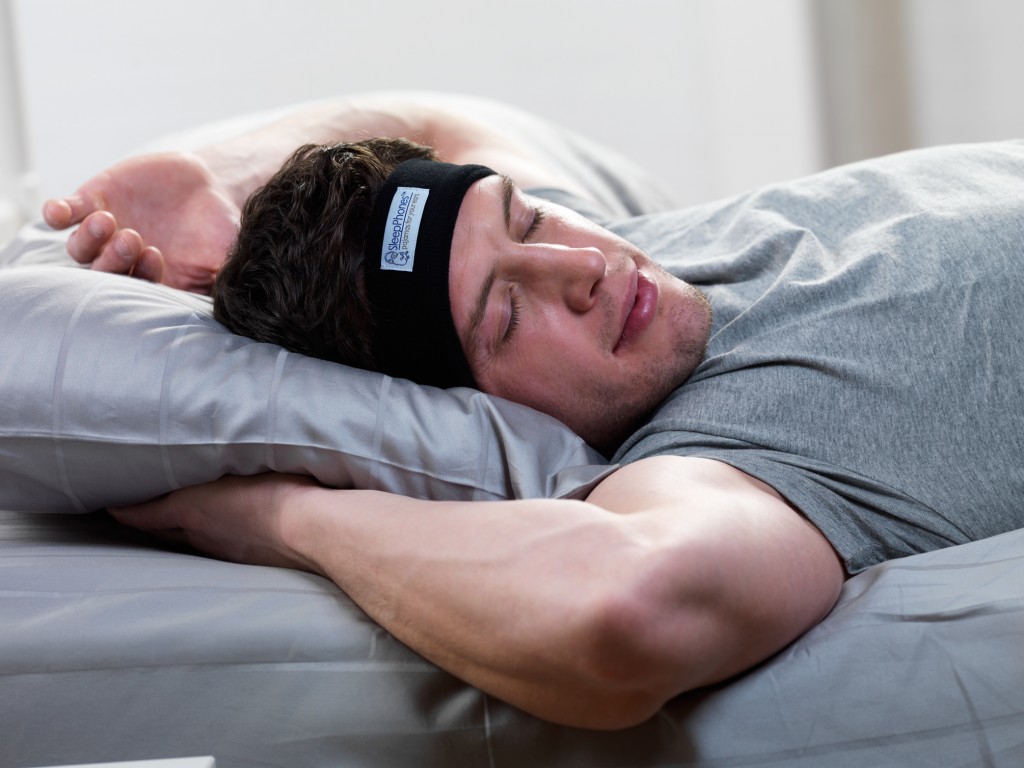 But I usually wear an eye mask, so I combined both functions by putting the Sleepphones across my eyes instead. Yes, I look a pillock, but they do a pretty good job of blocking out light (again, rental flats. Brilliant, aren’t they?).

The sound quality is very, very good. As long as you’ve got both ‘phones positioned over your lugholes and the volume turned up high enough, you can’t hear anything else.

However, if you share your bed with anyone (lucky you!), they’ll probably be able to overhear the music – the headphones are fairly leaky. This isn’t surprising given that all they’ve got in the way of insulation is a thin band of fleece, but it might cause problems if you’re not both wearing Sleepphones like this uncommunicative couple: 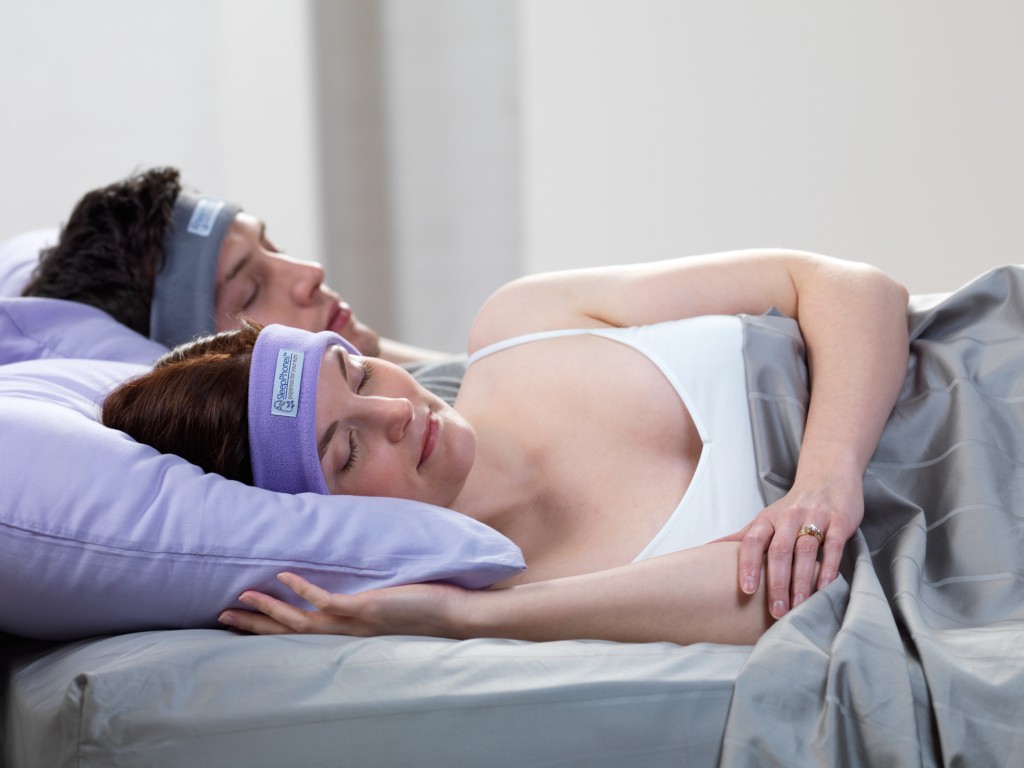 In my case, though, the Grumpy Cat plushie who occupies the Love Interest side of the bed didn’t complain once.

Sing me a lullaby

So, what’s the best thing to listen to on Sleepphones? Well, they have an official app (iOS only) which includes four sound files to try sleeping to. They are: waves, piano, waves plus piano, and white noise (some of which claim to use binaural waves to help you sleep better). However, the app is really, really pants and stops playing sound as soon as you do anything else with the phone, including turning off the screen. There’s also no timer. Nil points.

The sound files (plus more, including a sizzling bacon one that I think would make me fat within a month) are available for free download from the Sleepphones website, so you could use your phone’s MP3 player to line them up. Still no timer, and music stopping suddenly might wake you up. But at least you can turn the screen off.

I tried listening to a podcast (yes, it WAS Serial, why do you ask?) but fell asleep within 2 minutes, missing all the content. Spotify playlists didn’t work, because as soon as a song got louder or changed key, I woke up.

And then I found the holy grail

As I mentioned before, I’ve used the White Noise app in the past to try and drown out Monsieur Rhino. It wasn’t amazing out of a phone speaker, but pair it up with Sleepphones and… zzzz. Sleepy perfection.

The basic version of White Noise is free (iOS, Android), but you’ll want the premium version to be able to set different timers and let the app run in the background (iOS, Android – it’s under £1.50 on both). There’s a ridiculous range of noises to choose from, including plane engines, cats purring, various types of rain and waves and even fire, which seems like a great way to wake up screaming. Personally, Heavy Rain does the job for me, blocking out noise but not waking me up with sound changes. I set it to run for an hour, fading out over the last 5 minutes, and I’ve never yet woken when it stops.

What about in the morning?

At some point during the night, the Sleepphones turn themselves off. I’m guessing it’s after a certain period of noiselessness from the phone. This means my phone alarm still plays out of the phone (it wouldn’t if was still connected to the ‘phones, which might cause you to sleep in if you’d taken them off in the night) and the battery doesn’t run down too much. If you plan to listen to something all night, though, you might have different results.

I did find I often took the Sleepphones off in the night – I woke up without them about as often as with. I do this with my eye mask too, and once you’re safely off to sleep it doesn’t really matter. Sleepphones recommend setting an external alarm in case you do remove them before you wake up.

I’ve been using my Sleepphones for about 3 weeks and they’re easily the best thing I’ve found for blocking out my neighbour. They’d also be great for listening to music without irritating your housemates or partners, blocking out snoring or children, and even just as normal wireless headphones as long as you don’t mind the 80s keep-fit look.

The Sleepphones app is extremely naff and not worth bothering with, but using these with White Noise or another sound of your choice makes for blissful slumber, and no rhino-related rage. Recommended.

You can buy Sleepphones in the UK at Firebox.