Love it or hate it, the John Lewis Christmas advert has quickly become a festive tradition, with a focus on cuddly animals, family togetherness, and of course, a touch of magic. And, call me a stupid sap whose emotions can be manipulated in less time than it takes to say ‘I want a penguin’, but the new one, which launched online today, made me tear up a bit.

It centres around a young boy and his pet Adélie penguin, who have all kinds of adventures together during the year, from watching Pingu to playing hide and seek to trampolining.

But (spoiler alert) as Christmas approaches, the boy notices his feathered friend is looking mournfully at loved-up couples, clearly yearning for a partner of his own. So, early on Christmas morning, the boy brings his penguin pal downstairs to show him his present: a lady penguin fresh out of her wrapping. (No, we’re not going to think too much about the gender implications of that right now.)

We then see that both penguins are just cuddly toys (called Monty and Mabel, it turns out) and the boy’s parents were the ones who arranged it all, which I guess is necessary to sell penguin-related merch, but I could’ve done without the slice of gritty reality. The tagline? ‘Give someone the Christmas they’ve been dreaming of.’ And… tears.

The fact that all of this is underscored by Tom Odell’s simple, lovely rendition of the John Lennon song Real Love, really pushes the poignancy over the edge. (And, as The Guardian points out, all but guarantees him a chart-topping hit.) Yes, it’s sentimental, but it’s beautifully done and a clear winner over last year’s The Bear and the Hare because hello? Penguins.

It started trending on Twitter almost instantly, although not everyone is keen, with the fact that a large Monty toy costs an eye-watering £95 being a particular bone of contention (although smaller models start at £12). Meanwhile, Penguin Books is using the ad to good-naturedly remind everyone that they had a cute penguin mascot first and they have things to sell, too.

But most tweeters seem to be giving it the thumbs-up, with the ad even winning the coveted Phillip Schofield seal of approval: 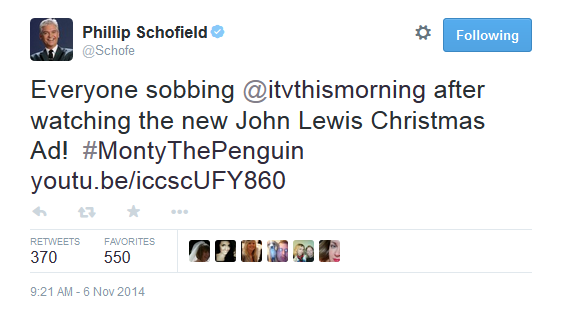 You can watch it on YouTube now, or catch it on any of the approximately 1 billion times it’ll be on TV from tomorrow (during Gogglebox on Channel 4) until the end of Christmas. And of course, you can follow Monty and Mabel on Twitter.