Muslims across the world have been celebrating Eid al-Adha, also known as the Feast of the Sacrifice. Also marking the end of religious pilgrimage Hajj, this year more than 2 million people made the journey to the Grand Mosque in Mecca.

Because if there’s one thing the internet was really lacking in, it’s Mean Girls tributes. If we’re lucky, this could be the new ‘May the 4th be with you’. 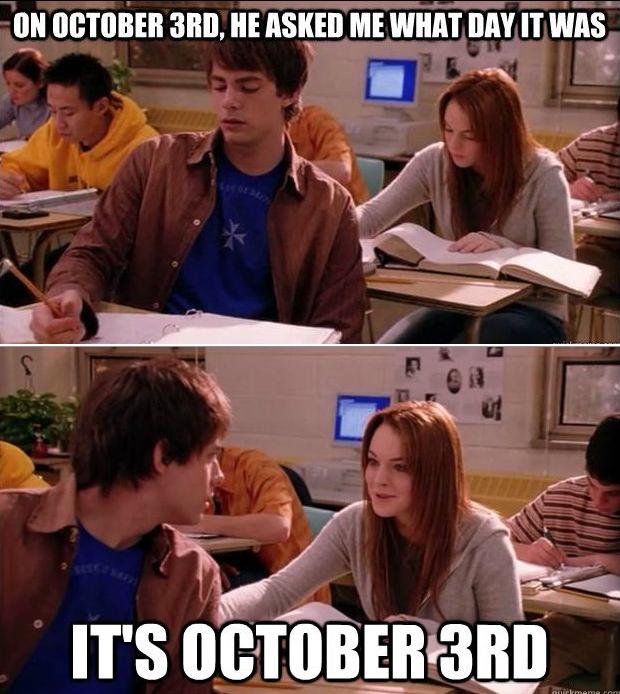 The funniest thing to come out of the Tory Party Conference since young William Hague’s hair, YouTube favourite Cassette Boy returned on triumphant form last week with his rap edit of David Cameron’s conference speech. In five days it’s had 3.3 million views, and spread so quickly on social media that even your Uncle Bob is scheduled to post it on Facebook before November.

Having won the month already by proving slightly catchier than #Octsober, Stoptober is in full swing so you should probably put that fag out. Originally Public Health England’s anti-smoking campaign, the idea merged with Go Sober for October and has now become shorthand for pretty much any autumnal self-denial you might care to boast about.

There’s a lot of good to be had out of all that abstinence, though. More than 242,000 people have now committed to quitting smoking this month, while Macmillan has already raised over £1.2 million from its booze-free campaign… and for the rest of us, rounds in the pub are suddenly a lot cheaper.

ABC’s new show How to Get Away With Murder made headlines a couple of weeks ago when it prompted the huge #LessClassicallyBeautiful campaign, and now it’s caught our attention again for inspiring this wonderfully geeky musing on the problems of TV hashtags in Time magazine. Like many other TV companies, ABC are facing the fact that fans won’t give up 23 precious characters to hashtag #HowToGetAwayWithMurder in full when they could just use acronyms instead. Take a tip from #GBBO, guys, and let the fans lead the hashtagging – if the TV is good, we need all the space we can get.

Just like that, WINTER IS HERE! Custard season has begun! Quick, get your coats out of the loft and take your tights up a few deniers.

And as is tradition, Twitter has opened the official debate on whether or not it is too early to out the central heating on. We’d vote no, but it’s hard to type while wrapped in a blanket.