Dawson’s Creek was great in its day: the ‘90s, back before any of us had actual worries and were happy to listen to overly loquacious teenagers string self-important sentences together and watch endless permutations of the Dawson-Joey-Pacey-Jen ‘love square’. (No wonder creator Kevin Williamson finally snapped and killed one of them off. The wrong one, but still…)

Now, on the other hand, it seems overly serious and angst-filled, making it ripe for parody. And what better way to puncture the show’s self-importance than a mini season one remake… with dogs?

Dachshund’s Creek takes some of those most memorable early scenes and recreates them with a talented bunch of dachshunds, because, well, long speeches call for the longest dogs, I guess.

Made by writer/director/editor (and now GENIUS) Michael Immerman, the video features a selection of sausage dogs in wigs and costumes, posed in settings designed to look like Dawson’s bedroom and the video store, among others. There are wigs and appropriate costumes and while making that one dog wear a backpack did seem a bit cruel, the dachshund playing Grams (below) is everything. 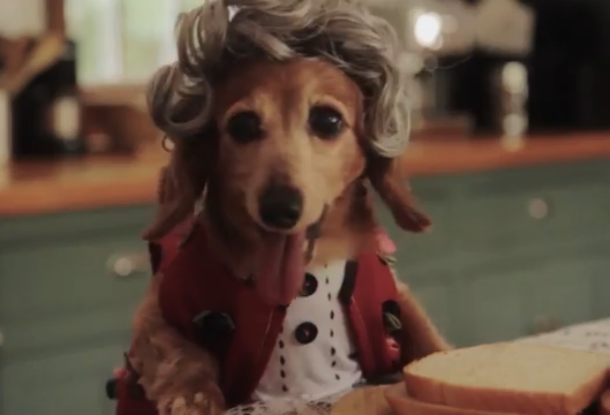 Most of all, there’s real dialogue, cutting effortlessly from ‘He likes you, you know…’ to ‘My grandfather’s aorta collapsed’ and featuring Pacey’s classic, ‘I’m the best sex you’ll never have!’ (These dogs are just as hormonal as the human cast ever was, although the doggy Dawson is a lot more huggable.) Undoubtedly a fantastic idea, the only question is what’s next: Bison the Vampire Slayer? One Dog Treat Hill? Puggy Little Liars? I don’t want to wait for my life to be over, I want to know right now.

[Via BuzzFeed via Keris Stainton.]